Get it done: Vaccinate Everything That Moves 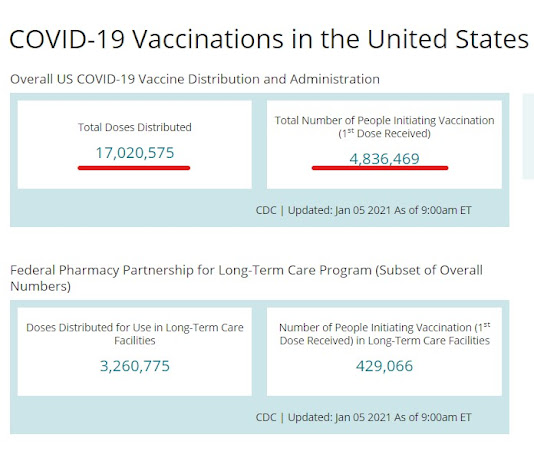 The new technology that created the vaccine in record time is extraordinary. Why, we as a nation, are failing in the old tech of sticking needles into arms is puzzling.

I’ve heard the experts explain how the patchwork of state and local governments and cooperation agreements with pharmacies and health care providers have sown confusion, if not chaos, about how and to whom to give the vaccine.

Trump is in his golf bunker in Florida denouncing democracy, saying COVID is a hoax.

Over 100 representatives in Congress support the president in his attempt to overturn the election. Trump might have succeeded if the GOP had a majority in the house.

Today Georgia will conduct a runoff vote on two Senate seats. No idea of the outcome. Even if the good guys win, the Democrats will be held hostage by the most conservative of their caucus, namely Senator Joe Machin from West Virginia. Also, no major legislation can pass without a supermajority in the Senate with 60 votes.

Still, I will do a happy dance if Democrats win the Senate. So long Mitch!

I’d like to think that once Biden takes office he can provide effective leadership in getting the vaccines into people. So much of the talent and energy of this country is turned against itself in the pursuit of power.

I’d like to see what could be accomplished with an alignment of federal, state, and local governments to end the pandemic.