Often when getting ready to go out the door I have to reiterate certain points of dress code. For the seven-year-old pants are still considered a fashion accessory.

In an ideal world I would have a system like the seat belt light on an airplane. "I"m sorry, sir, the Pants Light is on, everybody needs to put on trousers."  The above video chronicles recent developments in this regard.
Posted by Eric Flamm at 9:14 AM 1 comment:

I’m trying to recall the Greek comedy tragedy about the child who had a messy room and was doomed to low SAT scores as a result – the issue of room cleanliness seems eternal. “Aeschylus pick up your Battle of Salamis Legos™. Otherwise I will throw them in the Aegean Sea!”

The Greek element in all this is the gripping moral choices I am confronted with where a myriad of forces seemingly mock and thwart my every move.

Our 10-year-old daughter has a very messy room, and even to mention it is to bring on a meltdown. I had to mention it as we were hosting a brunch Sunday and wanted the house clean. I told her on Tuesday we needed a clean room. “We’re having people over this weekend. You don’t have to start now, but you need to begin to think about cleaning your room. You can watch your show tonight, but starting tomorrow no TV until your room is clean”

The glowering started almost immediately, and she stormed away from the dinner table and began a campaign of door slamming. After about the third slam my wife confronted her, “If you slam the door once more, you’ll lose your door privileges, which means the door to your room will be removed.”

I groaned, for although I am hopeless as a handyman, my wife is worse. I at least know the proper names of the tools, if not much else. Luckily for us at that moment the door slamming stopped.

The next night, the kid didn’t like dinner and again stormed away from the table, haughty and glaring. Angry, I disabled the router (she has an iPad) and a new round of door slamming began.

But here’s the rub: when we don’t get compliance with room cleaning we gradually reduce privileges – this takes about a week. It was now Wednesday. Usually until the room is clean we shut the door and ignore the problem. But if she lost her door privileges then we would be undone by all our friends being able to see we had lost control completely as parents.

Perhaps a good soliloquy will come out of this.

I’m wondering if I will be angry or happy if the daughter figures out how to hack the router setting.

Posted by Eric Flamm at 8:08 AM No comments:

My wife had her birthday this week and wanted to celebrate with the family by going to the Benihana in a mall in Beaverton. For her this was the Old Country, a place where birthdays were elevated to their proper level of veneration, which is to say in her mind we should paint “Birthday” in fuchsia backwards on the hood of our car so drivers would yield the road to better make the day special.

Needless to say she values highly the singing of “happy birthday” by any service worker and would probably ask the oil change mechanic to do so if she had any inkling she could get away with it. I hate anybody who I don’t know singing me happy birthday. But damn it! I was going to get in the mood and do right by my loved ones.

My wife went to Benihana many times in her life – each time for the express purpose of birthday celebration. I went once in 1975 and don’t recall much except that my father wore a coat and tie – a rare occurrence then.

In the restaurant entry there were photos of celebrities who have visited Benihana over the years, among them a black and white of John and Yoko, unfortunately underscoring the glamor days might have passed. I wonder what they were doing in Beaverton, Oregon?

Adding to my skepticism was that I was going to pay a hundred bucks for a family dinner where the kids might not like the food and would probably be disrupting others with family-oriented meltdowns. Why not spend fifty bucks for a surefire hit dinner and we don’t have to sweat coaching the kids through the difficulties of a challenging meal?

Oh, how little I knew about Benihana!

Going to Benihana isn’t about the food, that’s just an afterthought. It’s some sort of experience mandatory for cultural literacy. Jon Stewart has noted Benihana several times – maybe not as often as Olive Garden – but he has the place in his arsenal of punchlines.

My initial reluctance to embrace fully the beauty and precision of Benihana was due to my ignorance of the establishment and that I’m a crusty middle aged guy who likes to converse with my companions during dinner.

Once I realized the place was birthdays and only birthdays I got it and quickly joined in the fun. This is a kid-friendly place and the other diners, based on their attire, weren’t worried about headgear, long pants, shoes, or even meltdowns (too noisy). Plenty of kids, old people, guys with black T-shirts and crew cuts, and over-served men in sweatpants. The table across from me had one couple on a date night staring at four overweight sales reps. These are the people who don’t get it.

The food tasted fine, the staff were efficient and pleasant, and the tambourine-beating waitress who lead the birthday singing did a fine job – I can only cringe imagining how I would handle that one, David Sedaris’ Santaland Diaries would be GarrisonKeillor in comparison.

Intoxicated with my new understanding I shot a video of the meal, condensing the 90 minutes into a salient three. The evening wasn’t (completely) about me – it was for my wife, my kids, the Portdaddia team!

Further kudos to Benihana for delivering such a fine product. The above-mentioned tambourinist took a photo and presented it to us with the check.

Posted by Eric Flamm at 2:55 PM No comments:

This could be cool. Check it out.

The Secret Life of a Rock Dad - NYTimes.com

The Secret Life of a Rock Dad - NYTimes.com
Posted by Eric Flamm at 3:47 PM No comments:

Enough already, get your lazy asses out of bed (or, the Bell from Jerusalem)

My wife and kids went to Israel last year and had a great time at a family event. They toured different places and, of course, went to Jerusalem and the Old City.

My kids, then ages nine and six, purchased a few souvenirs, the prize possession in their archive was a fake pewter bell with a menorah on it.

“Daddy in the morning you can ring the bell and we’ll wake up.”

I laughed, as I actually have to wake the kids up weekday mornings.

My wife gave me the look that meant this was pure distilled childhood innocence. Embrace the bell, or go torture small animals or whatever it is people like you do anyway.

“Fine, I’ll ring the bell when it’s time to come down.”

So often as parents we find ourselves doing retarded ridiculous things again and again because that’s the habit we, as a family, have created. I rang that stupid bell for months hoping beyond hope that the kids would actually hear it and get out of bed.

“We heard it Daddy!”

I have the annoying habit/ great fortune of being cheerful in the morning and try to bring good spirits to getting the kids up and going. Basically nothing works except lots of yelling.  Every now and then one of the kids rings the bell and looks at me like I was the butt of  an elaborate joke – touché!
Posted by Eric Flamm at 12:42 PM No comments: 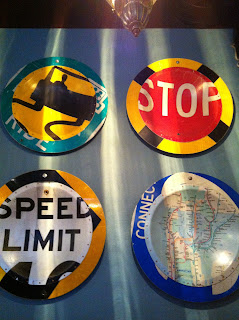 This blog intends to explore the space where parenting meets technology, culture, humor, and the cosmos. All in pithy bursts of crisp prose. Let the games begin! Not.
Posted by Eric Flamm at 10:55 AM No comments:

I suppose you are wondering why I of all people am starting a daddy blog. What qualifications could I possibly possess? In this regard, please refer to the following points: