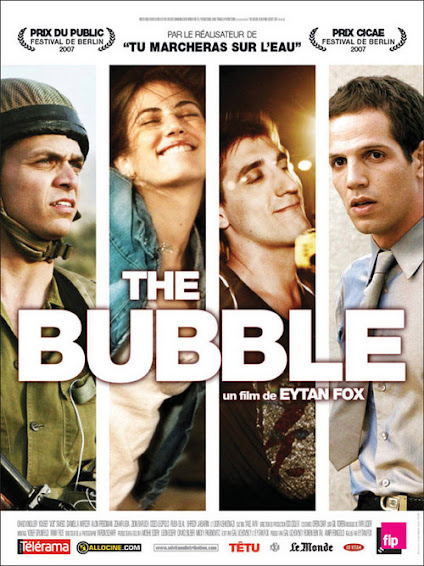 The title of this 2007 film is a reference to the Tel Aviv “bubble” of liberalism toward Palestinians that is lacking in other parts of Israel. Like all movies dealing with Israel/Palestine, this is a tragedy.

The main plot revolves around a love affair between two men, an Israeli and Palestinian. They meet when the Israeli is doing his reserve duty at a check point. They have some nice times in Tel Aviv before the reality of the conflict drive them apart.

The film feels significantly dated at times as it presupposes an organized anti-occupation movement in Tel Aviv – one where the adherents enjoy raves and trance music. There is a scene of a scuffle with right-wingers, but such is mild compared to recent years.

My main takeaway is the illustration of how the occupation distorts everything in Israel/Palestine. One may struggle with work, love, life, all of it complicated by the on-going need to keep Palestinians under martial law for time immemorial.

As an anti-occupation film this is weak tea, as the story is mainly told from an Israeli perspective.

This is my seventh film regarding Israel/Palestine in the last two weeks. One theme that reoccurs frequently is the generational conflict generated in Palestinian society as it transitions from an agrarian culture to an urban one. I can’t speak to how valid these representations are but am guessing it must figure quite prominently to be commented on so often.