When A Sixth Grader Attacks A Can Of Beans


Still, she reached her objective - perhaps not in the most expeditious manner.

Email ThisBlogThis!Share to TwitterShare to FacebookShare to Pinterest
Labels: beans

I supposed I should know more about manga, generally a style of comics created in Japan. My daughter is quite taken with them and has read several.

I understand that manga come in all flavors and are read by everybody. I have my own issues with manga as I associate overworked salarymen reading them on the subway. I suspect manga might contribute to Karōshi (過労死), or death from over work.

In the light of day I realize that such fears are misplaced and am generally glad my daughter wants to study Japanese so she can eventually travel to Japan, a place that takes comics and video games more seriously than this one.

I just realized that the above image might be “anime” a word that describes Japanese animation.

I will catch hell (in a playful way) from the daughter for confusing manga with anime. I often felt my parents were out of touch with the details of my life when I was growing up. I may not achieve mastery of these elusive Japanese art forms, but at least I’m self-aware enough to know my limitations.

I’m hoping for a simple answer: manga are comics (or graphic novels as fashion now dictates); anime is animation (it moves!)

If everything could be so simple.

Posted by Eric Flamm at 5:30 PM No comments:

I can't say how happy I am seeing the daughter wearing the interesting garment pictured above -- she looks great.

The conical hood has foam inside so when it is on her head the point sticks out -- this alone was worth the price of admission.

I admit I am outside these cultural currents, but I know what I like.

Posted by Eric Flamm at 7:11 PM No comments:


This past Sunday we went to Portland’s Wizard World, a localized Comic Con, where the entertainment is to walk around and appreciate creativity.

I admit it took a while for me to fall under the enchantment of the whole thing, as each ticket was $50 (the nine-year-old was free), but very little schwag or public displays to warrant such a high entry price. The entertainment was generated by the attendees and the vendors.

There were some interesting artists using motifs of characters from video games, sci fi and horror shows, and comic culture. Many of the arts and crafts people did the 30-show circuit and appeared to be a hardworking lot.

At the end of our day I had to admit that we had a blast, the kids geeking out on a few cast members from “The Walking Dead” (photos $20, autographs $30, “Hellos” free).

I worried I would be the only middle-aged guy there – not an issue by a long shot.

I had the urge to consider a costume for next year, but it evaporated by the time the car pulled into the driveway.

For me the best part was to ask random people if I couldtake his/her picture and never be refused – such were proud to be noticed. A few more editorial thoughts ended up in the video:

Posted by Eric Flamm at 8:30 PM No comments:

My Snaps From Portland Comic Con 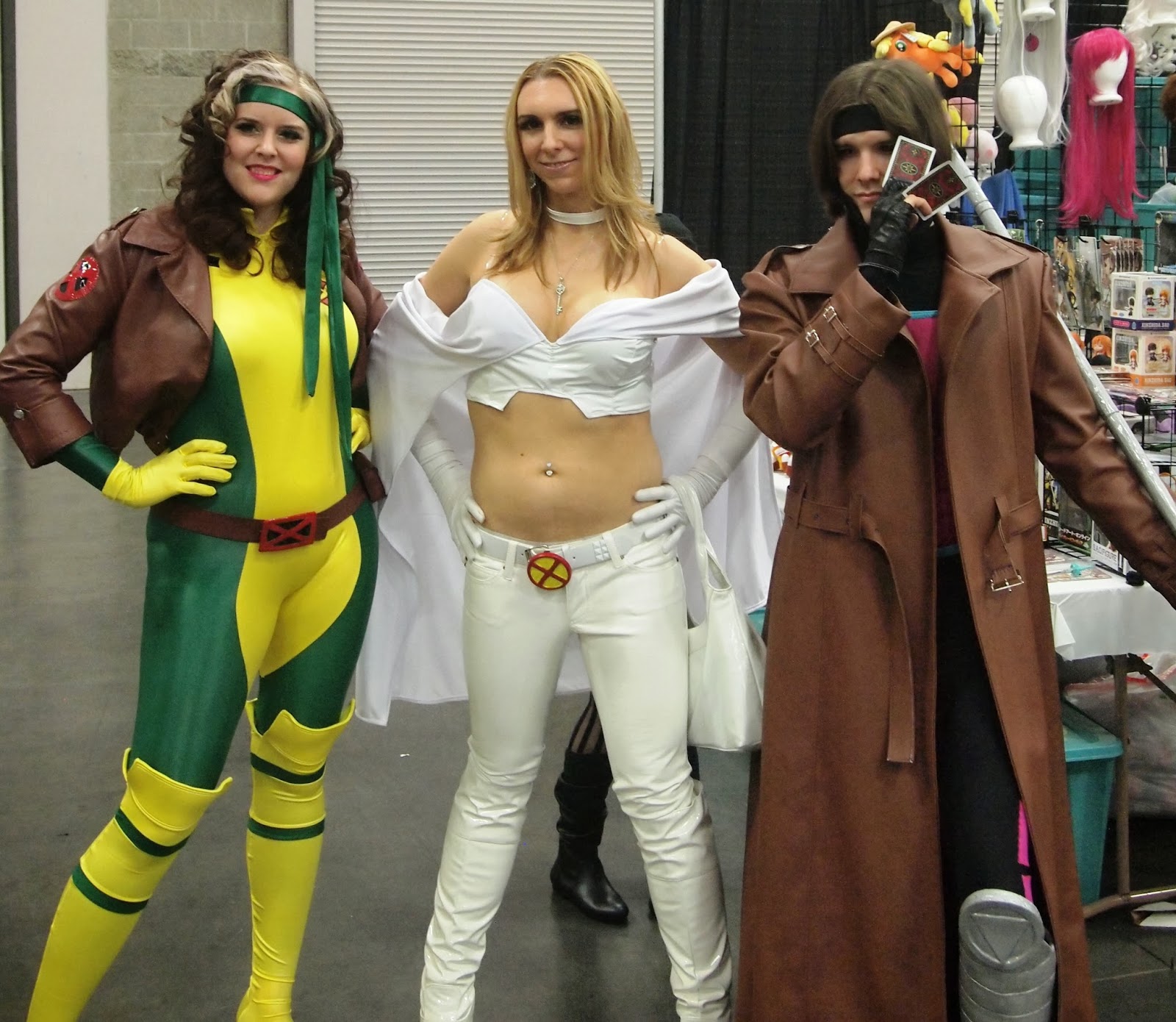 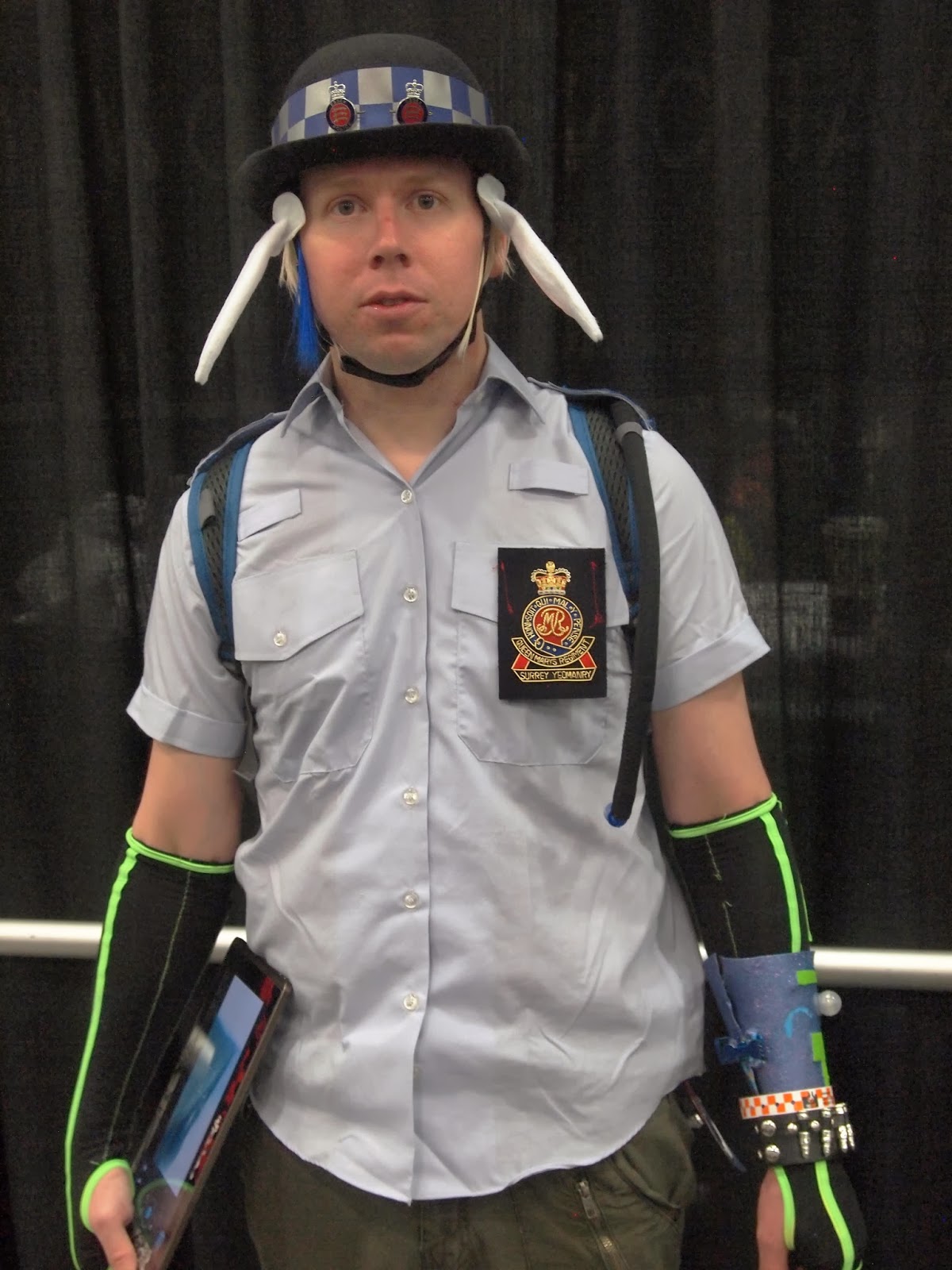 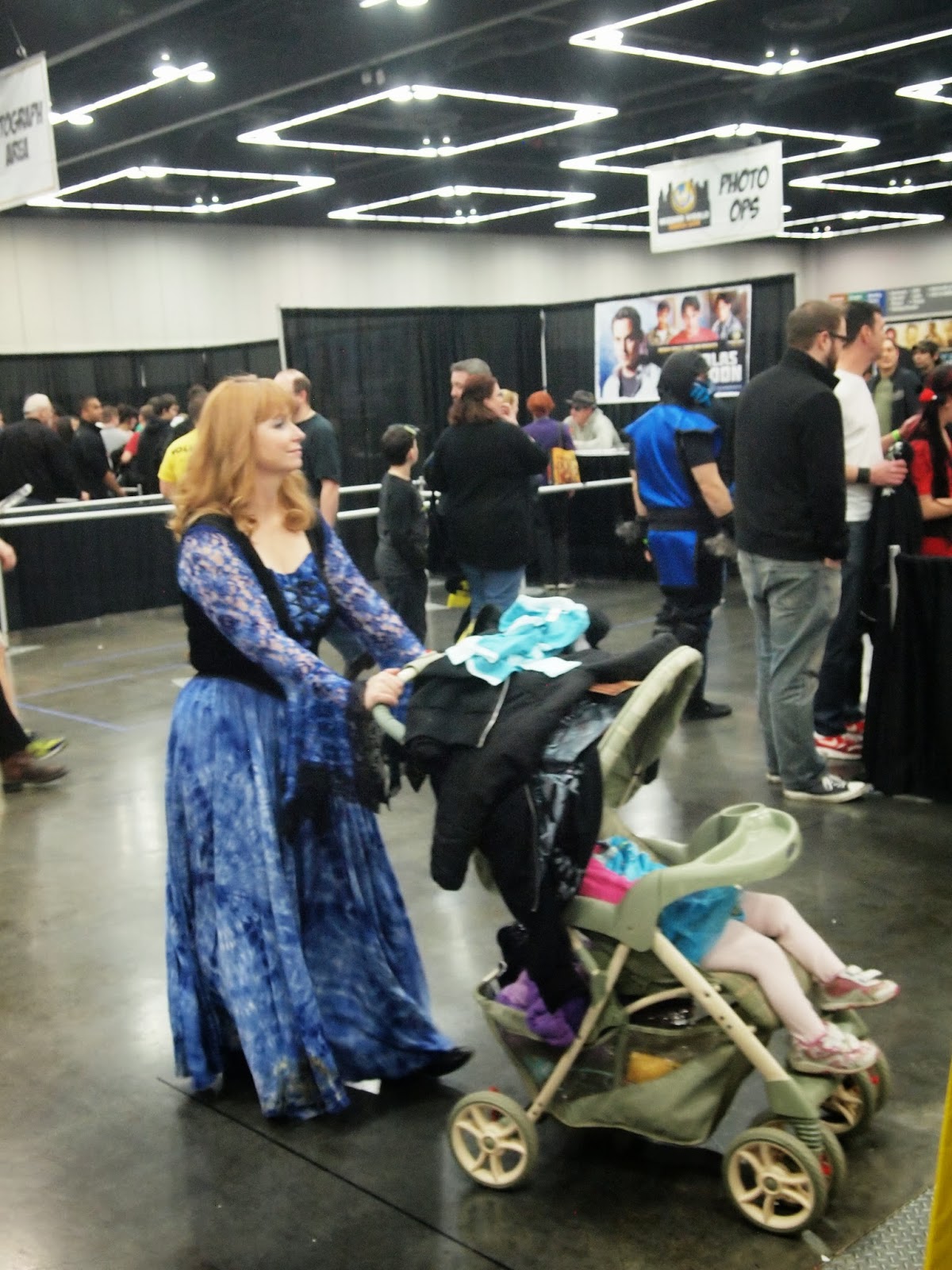 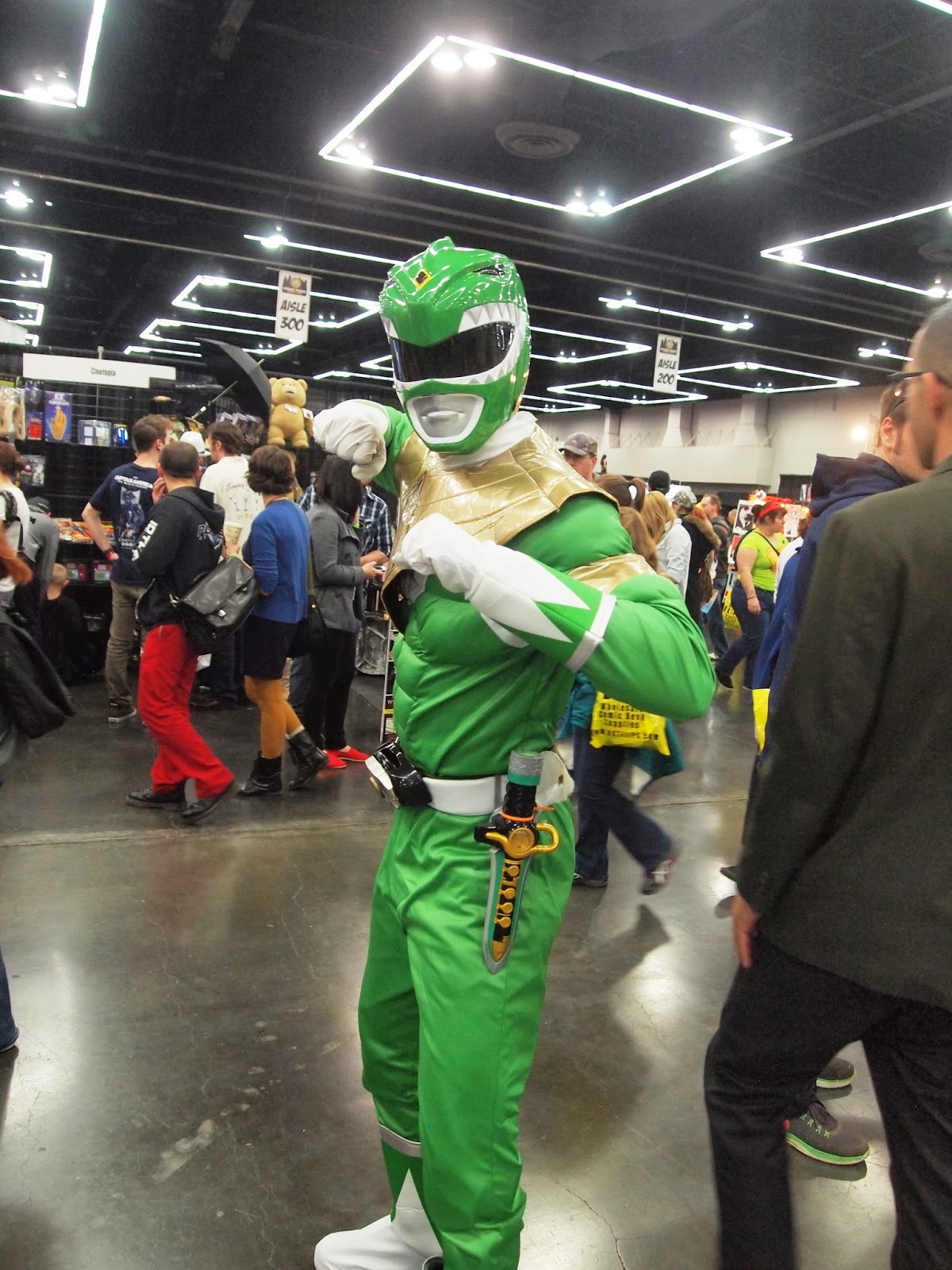 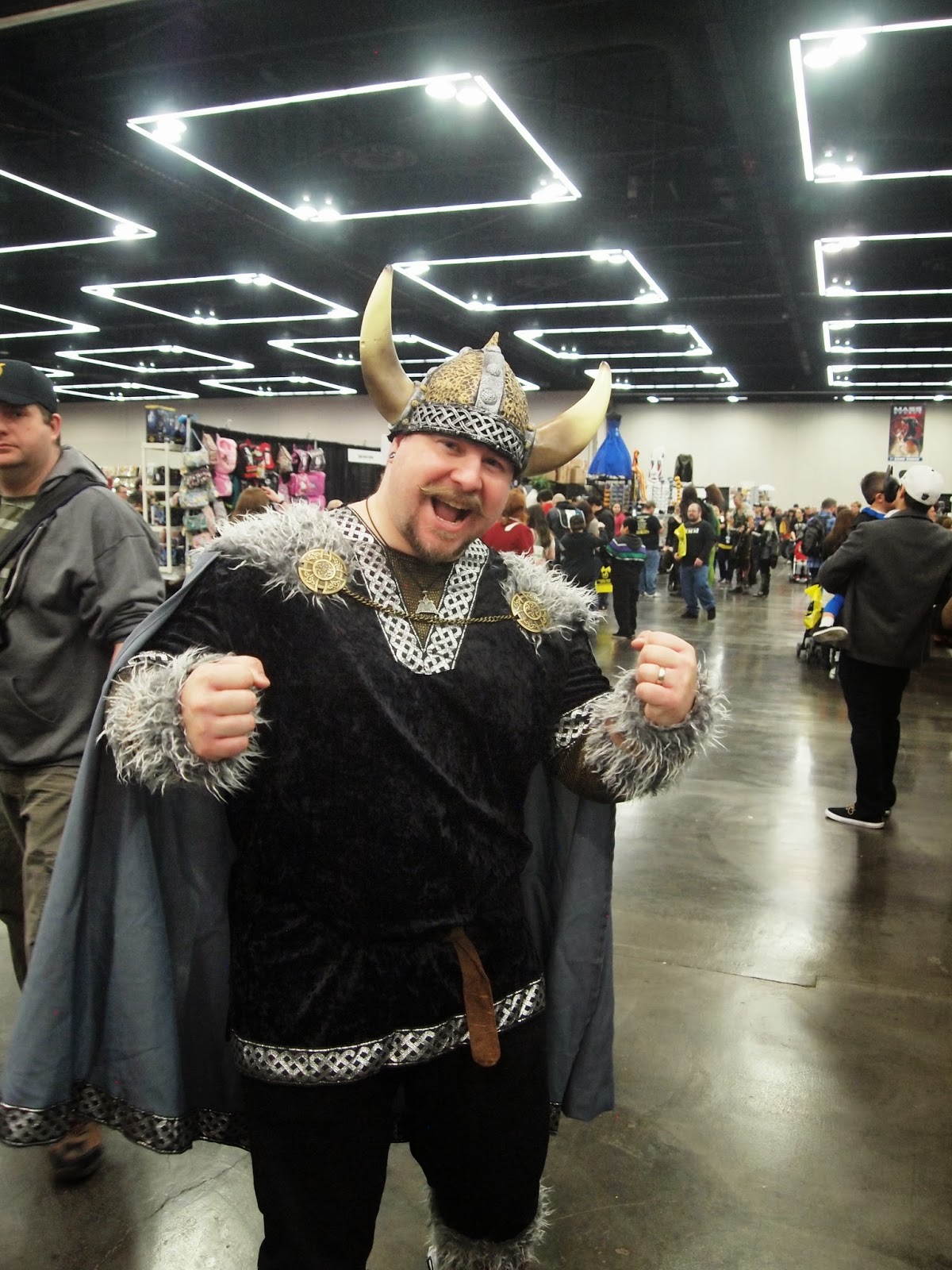 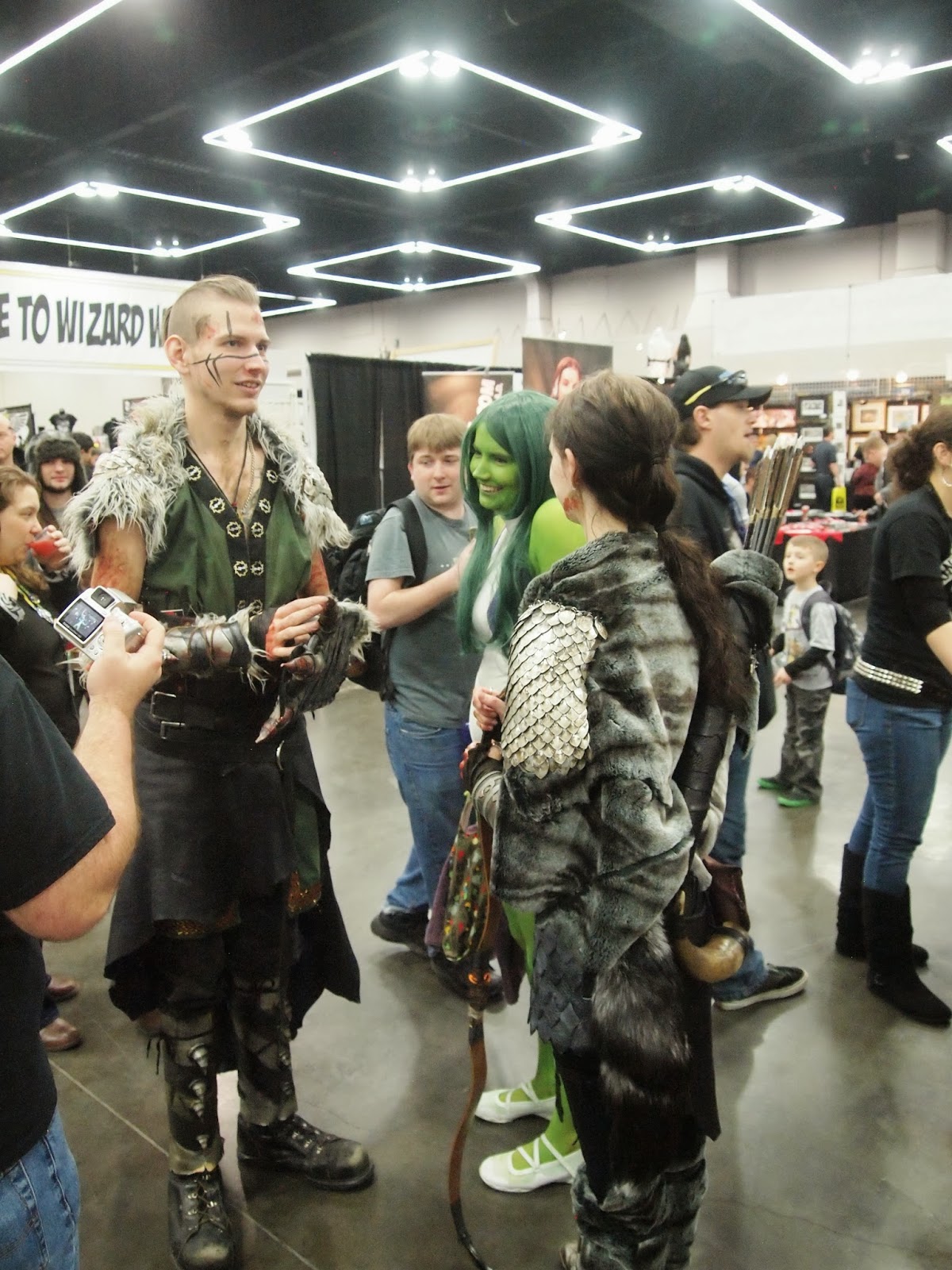 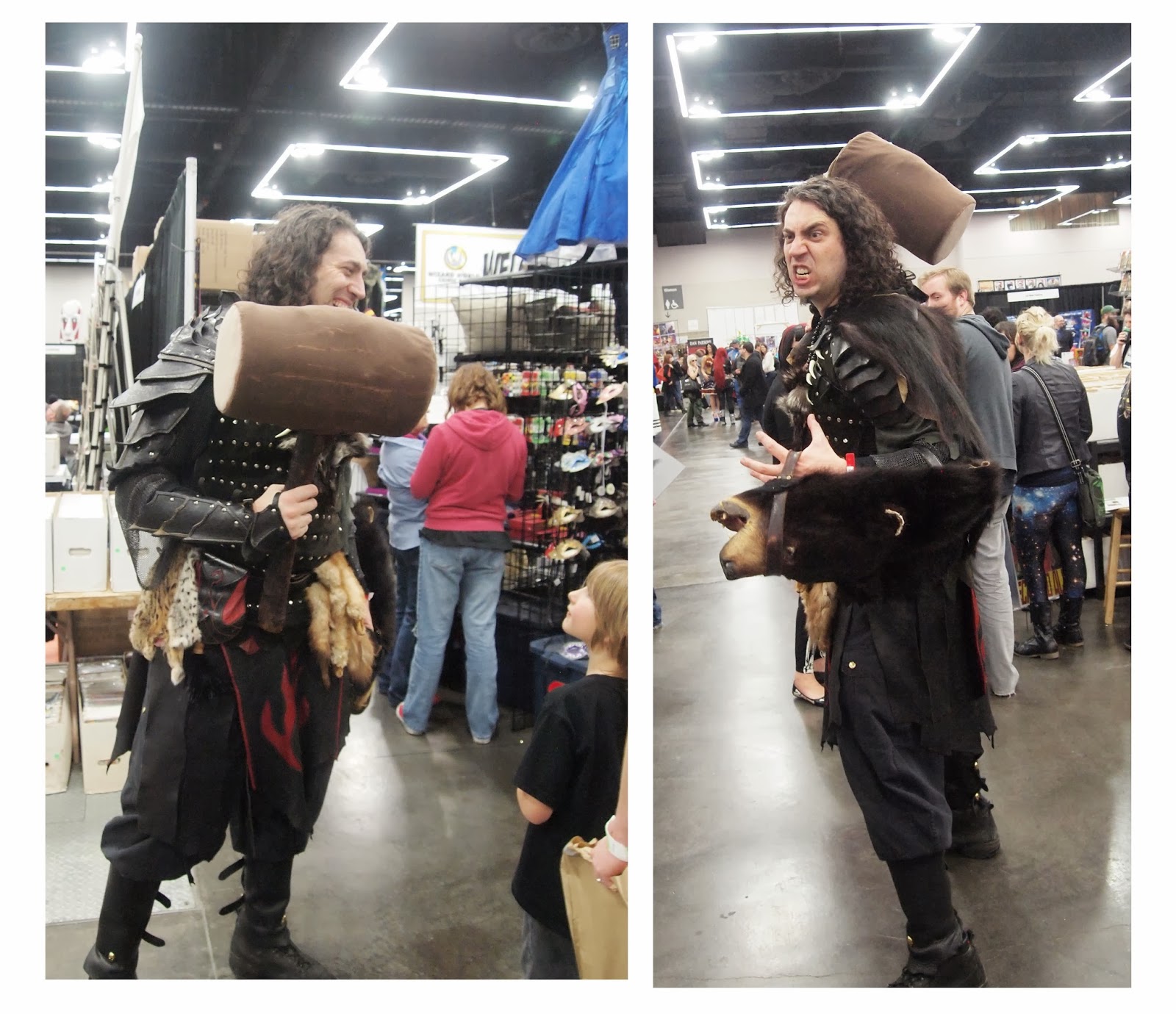 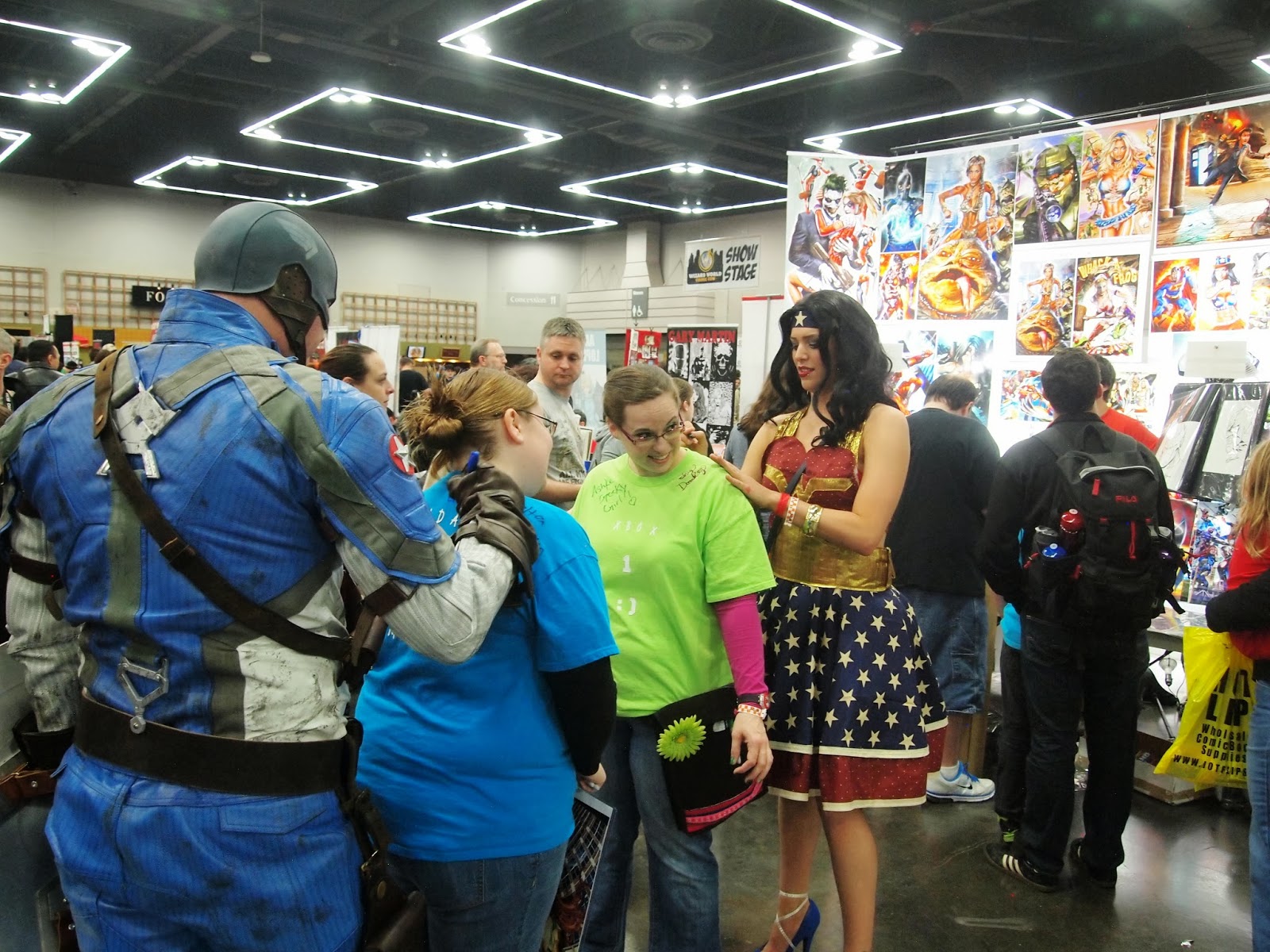 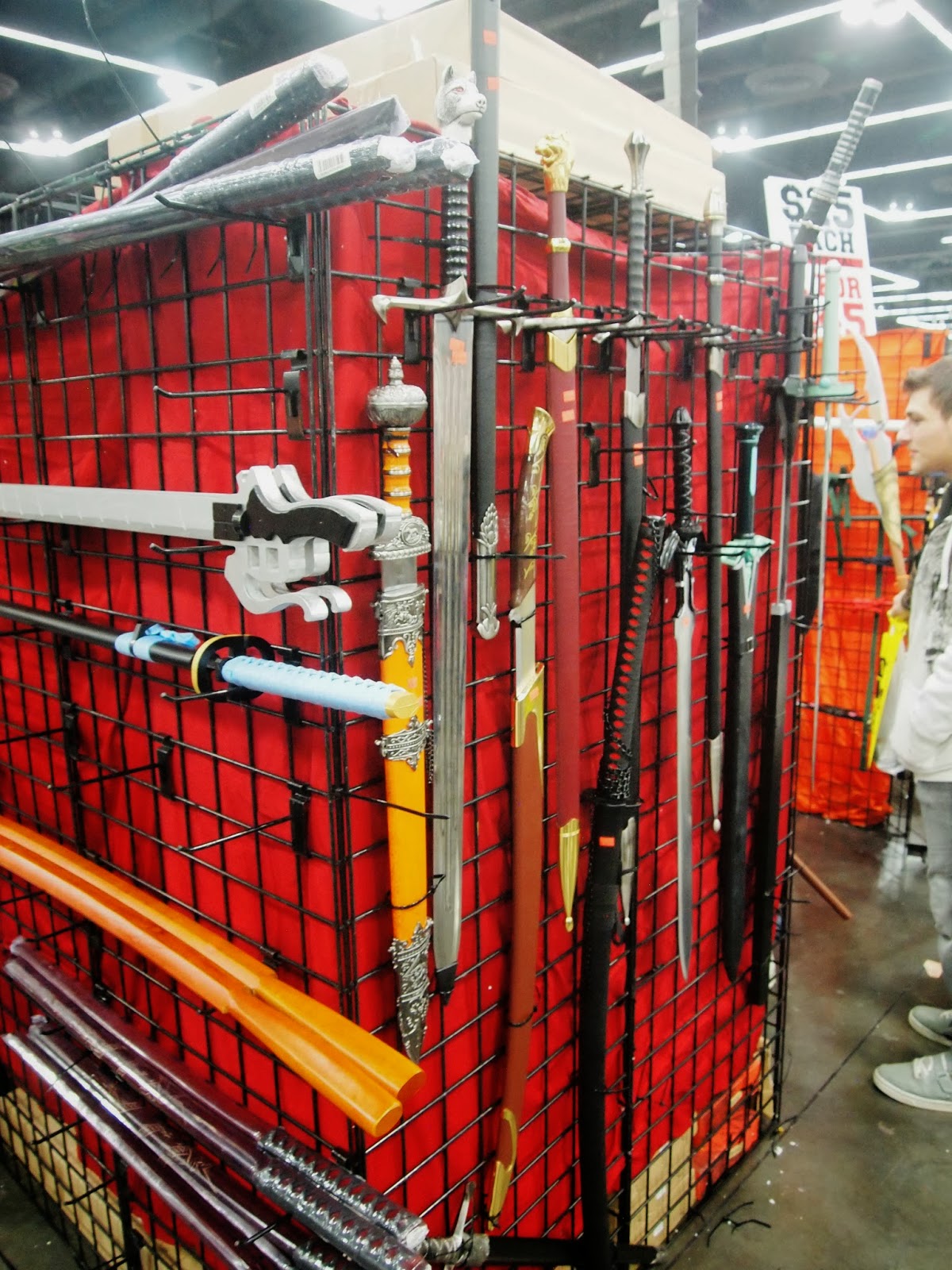 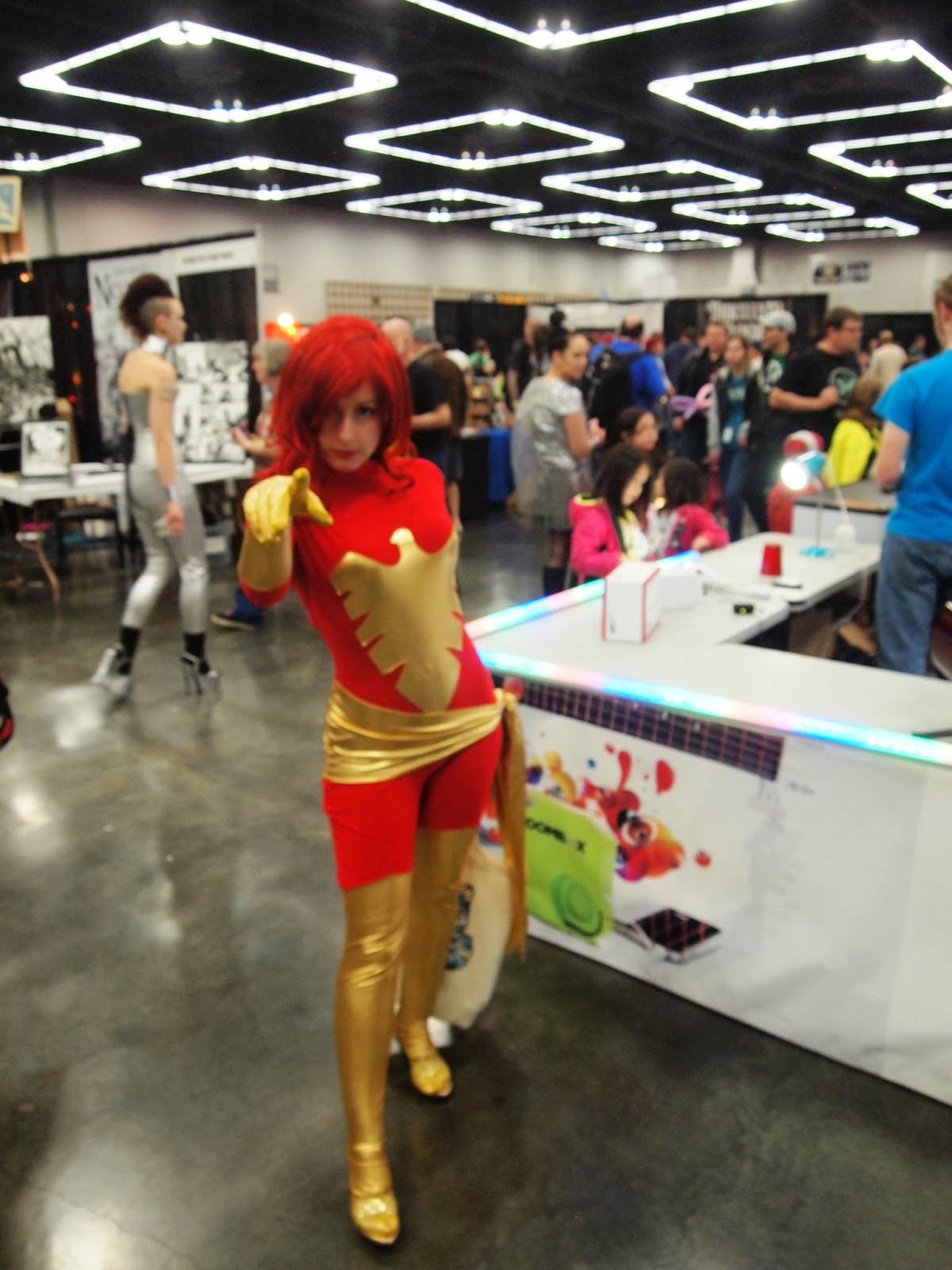 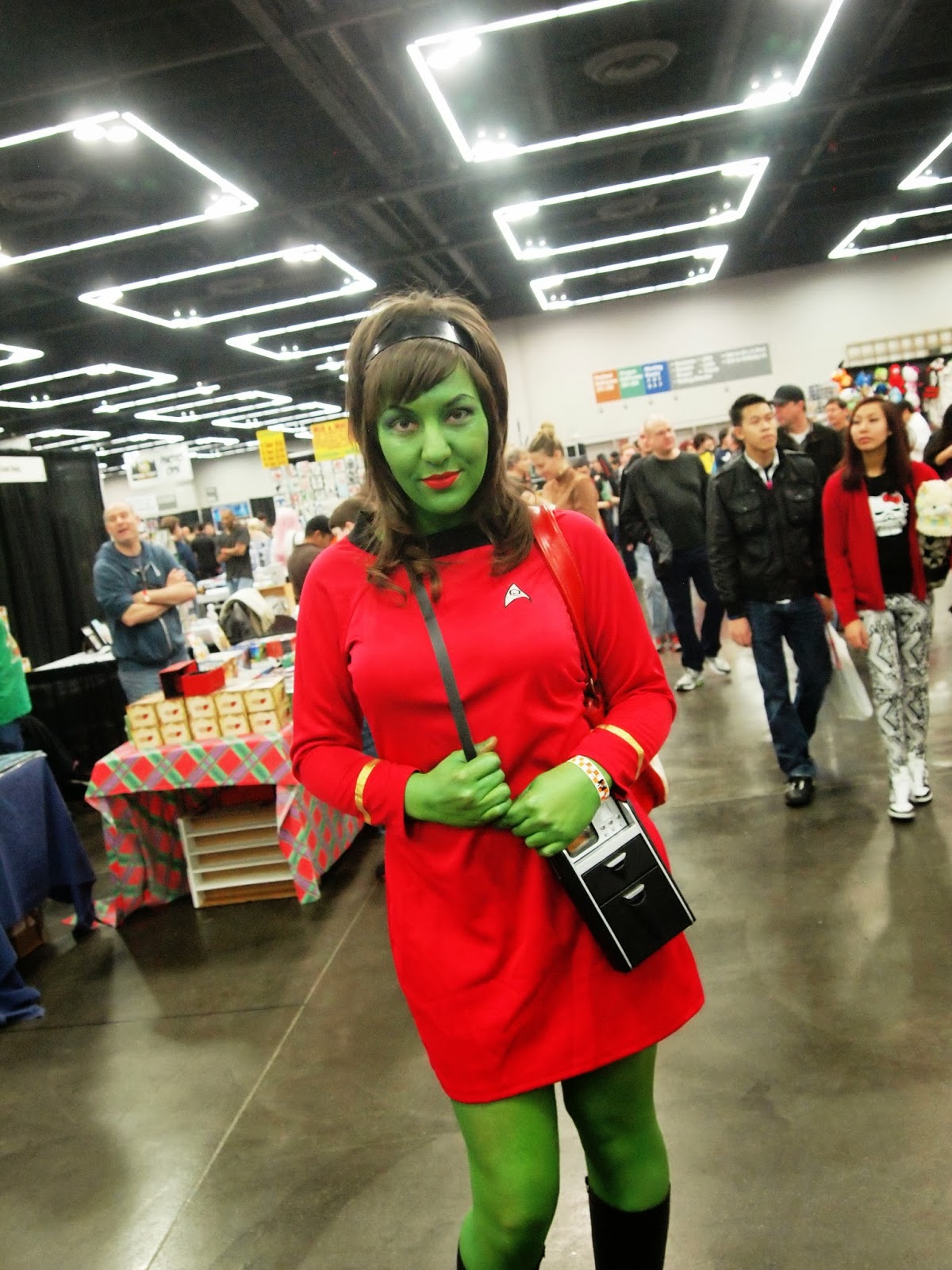 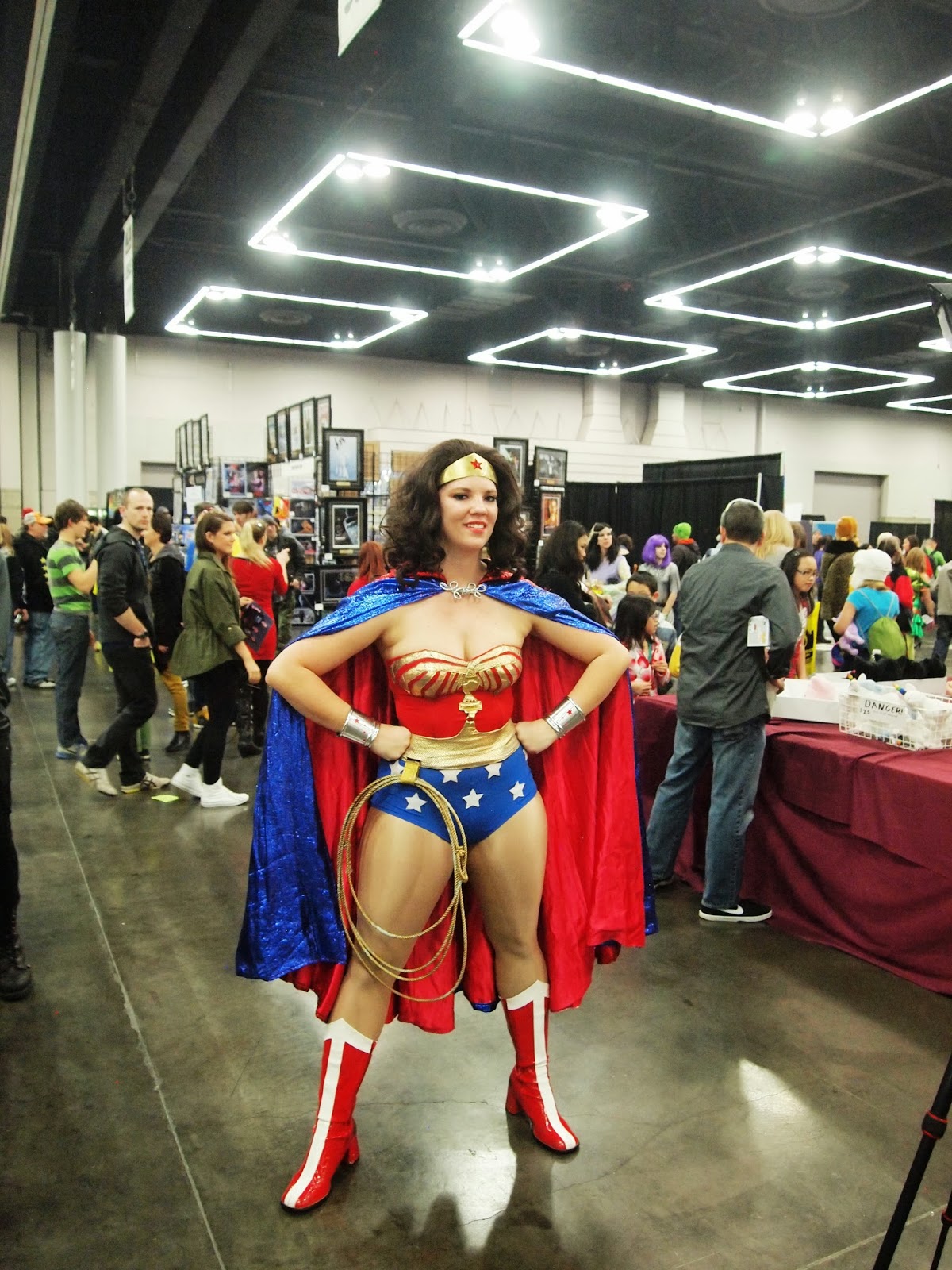 Posted by Eric Flamm at 8:31 PM No comments:

Report From The Breakfast Table -- All May Be Too Well

The little ones are growing up! How can I tell? Simple.

They now will eat such things on their bagels as they never before would entertain, such as cream cheese and various forms of preserved fish.

Before the son would only eat a toasted bagel dry à la Jake Elwood, a reference for those of us of a certain age, while the daughter would have a smidgen of butter and nothing else.

True, tortilla bake is still a punch line, but meat sauce on pasta is slowly supplanting the ubiquitous butter and cheese.

I suppose the nightmare scenario will be when the kids become such epicures that they will have issues with all dishes of my preparation. Dad, you’re supposed to serve the Fromager d'Affinois at room temperature, and paring it with apples and soda water is beyond ridiculous, you ignorant old fool!

I do count my blessings that I can still get away with making hot dogs for dinner every once in a while (as long as they’re Olympic Provisions specialty frankfurters).

Posted by Eric Flamm at 6:25 PM No comments:

Email ThisBlogThis!Share to TwitterShare to FacebookShare to Pinterest
Labels: food 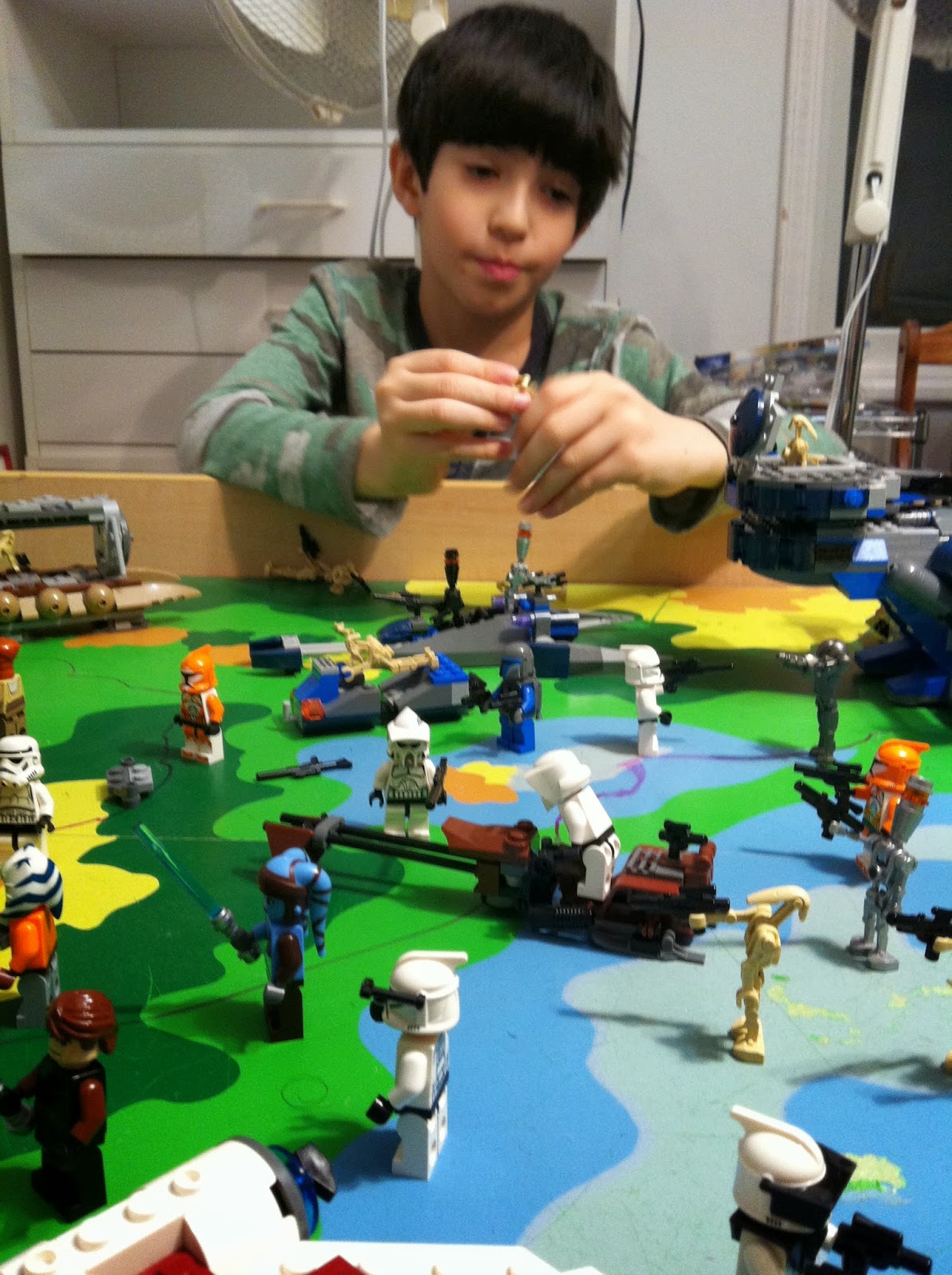 The kid explains his philosophy and intent with his arrangement of Lego Star Wars figures.


The embed function is down so you'll have to follow this link to watch the video.

Posted by Eric Flamm at 8:03 PM No comments:


The kid has set a goal: the most epic Lego Star Wars formation ever.

I am helping, sort of. My role is to make sure each figure has a weapon and is as badass as possible.

Unfortunately every time I set down a piece it is in the wrong place.

I am happy to merely observe the kid's creative vision. Bring on the Gungan warriors!


Two bit of technology have made my life different, if not easier. The first is a vending machine in a local grocery store that duplicates keys. It worked, `nuff said. 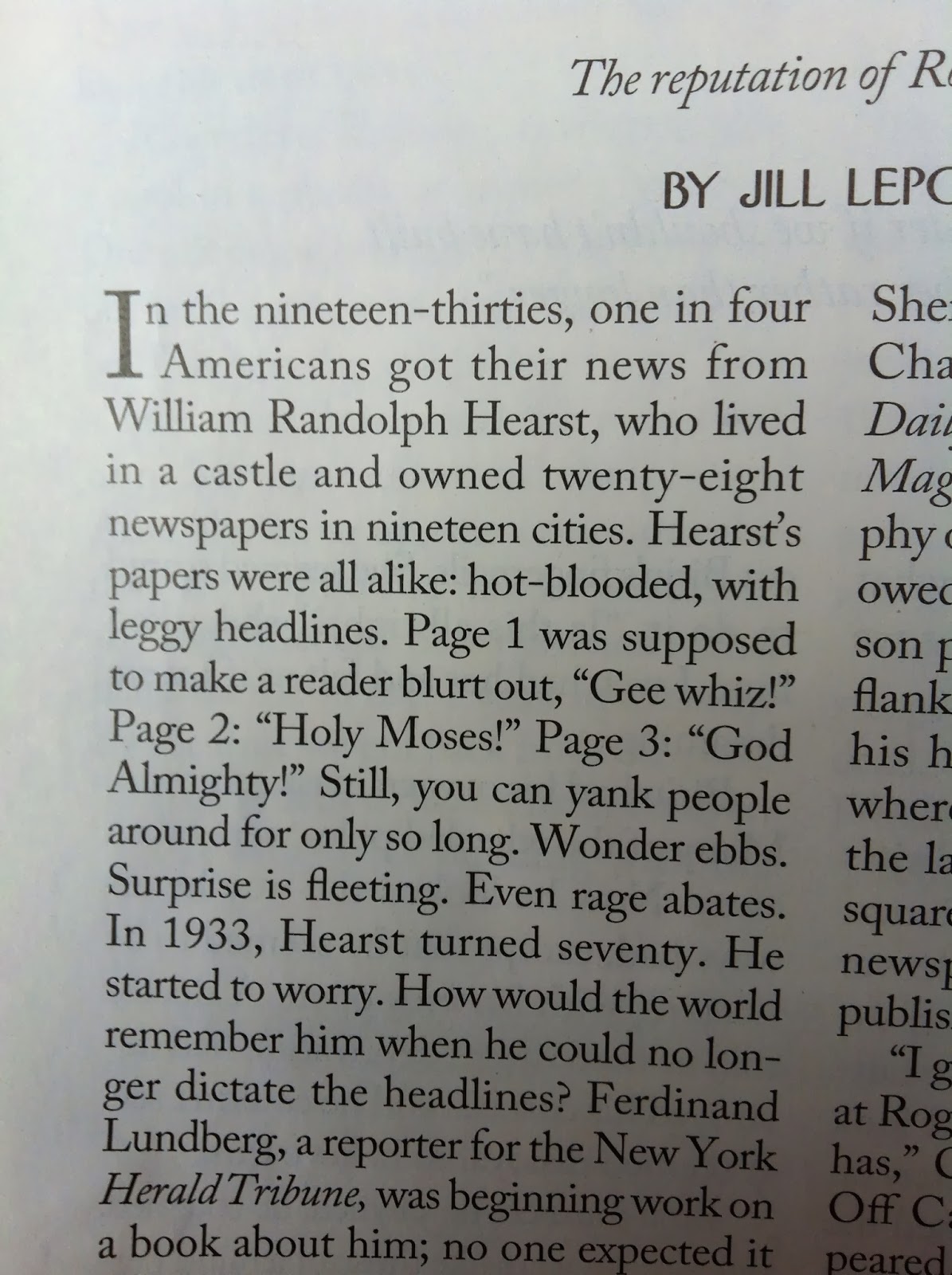 The second is Textgrabber which I use on my iphone. I take a picture of text I like and the app "reads" it and translates it into text -- it also will translate into other languages (I hope to try Ukrainian soon!). I then email it to myself and can then use the text for nefarious purposes without having to type it in myself.

The word recognition works pretty well and it will aid me in my plagiarism. I humbly admit that all the good stuff comes from others. Run the software, you'll see.

Posted by Eric Flamm at 5:58 PM No comments:

Email ThisBlogThis!Share to TwitterShare to FacebookShare to Pinterest
Labels: technology

Inspiration For The Nine-year-old 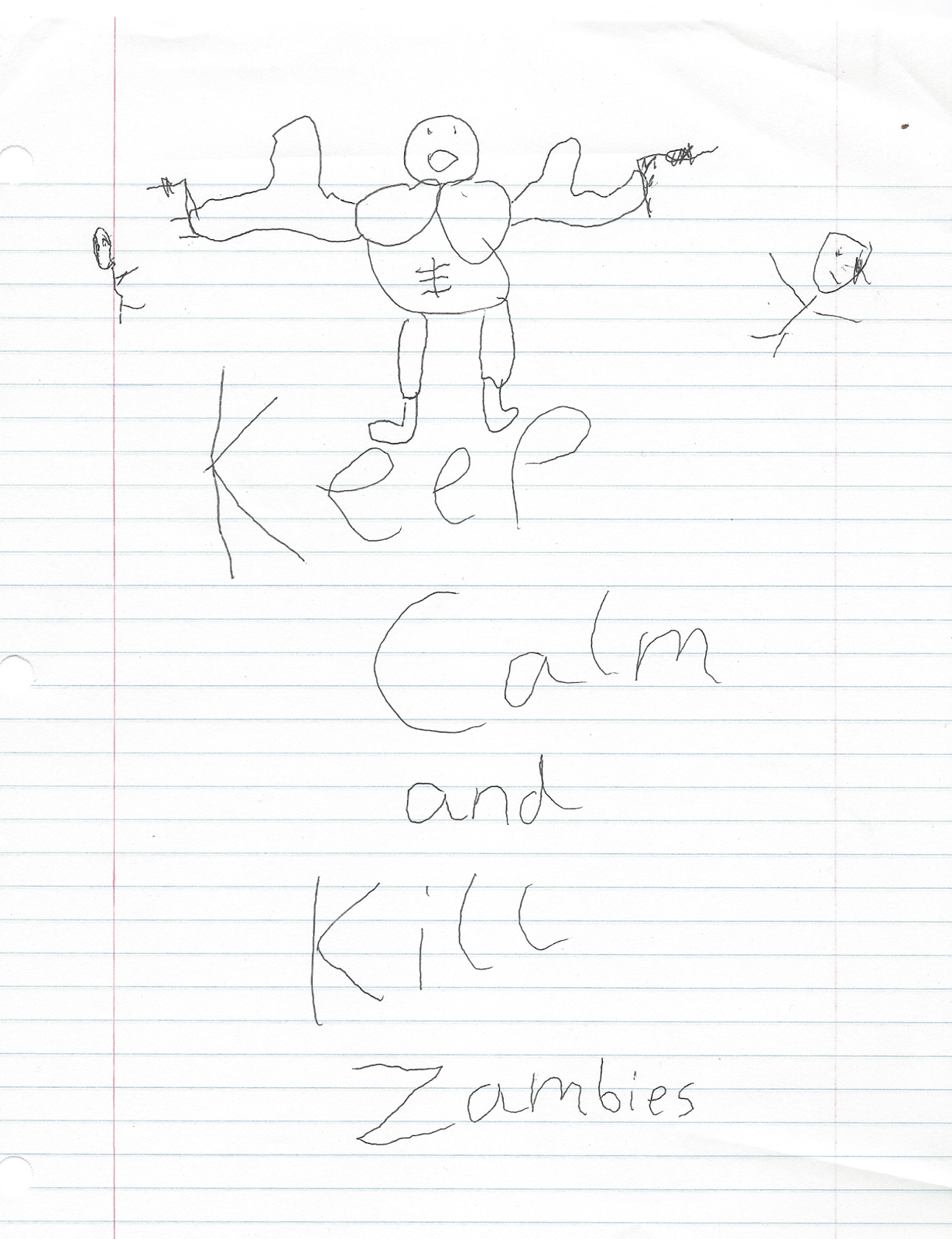 I took the kid to school today, peeking inside his locker, wondering what items or images of inspiration he held dear.

The above was taped in a prominent place. I like that he puts emphasis on keeping calm, or at least feels that zambie (this is not a typo, rather belief that the zombie apocalypse will occur only in the American South) killing is best done with a relaxed mind and bearing.

This reminded me of BFTSM, who takes inspiration from a mashup of dramatic lines from the 1992 film "Last of the Mohicians." The actual lines are: "No, you submit, do you hear? You be strong, you survive... You stay alive, no matter what occurs! I will find you. No matter how long it takes, no matter how far, I will find you."

I can't say that I have a similar catchphrase or artwork that I turn to for inspiration -- feel free to make a suggestion. The closest thing would be my current signature graphic, which is, indeed, epic.

Posted by Eric Flamm at 3:07 PM No comments:

Posted by Eric Flamm at 5:57 PM No comments:

I would not post this if this were a one-time thing. But the kid is pleased with his new bedtime ritual which has existed for about two weeks.

He puts on the ripped socks and proudly parades his invention of "sleep sandals" to the family.

If he can't find them, he loudly announces his earnest search for them.

Here at Portdaddia Central we take creativity very seriously, so I applaud and encourage the kid's efforts in this regard.

If sleep sandals get anybody into bed and asleep faster I'm categorically in favor of them. If the trend continues I might even have to try them myself.

Posted by Eric Flamm at 7:14 PM No comments:

The Minecraft Connoiseur - A Video

Posted by Eric Flamm at 4:57 PM No comments: