Use the unoccupied booster seat to safely avoid a rolling watermelon -- just try and not stop quickly.


Place a cherry in a circular pretzel for an aesthetically pleasing snack -- your family will be intrigued, if not a bit nonplussed about the weird taste.

The seven-year-old who decamped for a week of summer camp on the Oregon coast has sent us the following missive:

Dear Family,
Camp is Great. I Feel Like its The Best Place in earth. Who cried when I Left?

Myself and Mrs. Portdaddia were giving the letter close textual analysis, looking for semiotic clues to an essential truth. But before we explored hegemonic references, the following arrived:

The letter, written on orange paper, perhaps referencing fraternal protestant organizations in Northern Ireland, or a popular Dutch soccer club, arrived on the heels of the first:

I Went canoeing and drama. (So Far) Still who cried when I Left. (Please say who cried In next letter) I forgot to say after canoeing I was as wet as Devils Lake. I want a package!

Questions about crying, statements about being wet -- we've decided that the 90-minute drive is too much time. We've called the Coast Guard -- they've got helicopters!

Sometimes being a good father is all about spitting water all over yourself.

During this process of education and personal growth we put together a short film of our work.

This is “Meat Week” on NPR and I have been enjoying the different broadcast segments about America’s dietary habits.


Despite living in the People’s Republic of Portland, we are not raw-food vegans, far from it – we are committed omnivores from our marinated flank steak to pepperoni pizza. Still, we have followed national trends and are eating less meat.

I am the primary food preparer in our family. And as such I like to keep a few Get-Out-of-Jail-Free meals in the refrigerator – meals that are easily and quickly prepared and can be kept in readiness for long periods of time.

Of course hot dogs fit this bill, as both the bun and dog can be kept in suspended animation indefinitely in the freezer. But recently I have been relying on Smart Ground Mexican Style textured vegetable protein.

Throw it on a tortilla with beans and the usual toppings, or on chips for nachos. Tastes good, bumps up the protein content, zero saturated fat, kids like it, boyah!

Also, given that just about anything can be incorporated into burritos and nachos, small containers of leftovers often get incorporated – sucked into the bean pot as if by the psychokinetic powers of vegetarians everywhere.
Posted by Eric Flamm at 10:18 AM No comments: 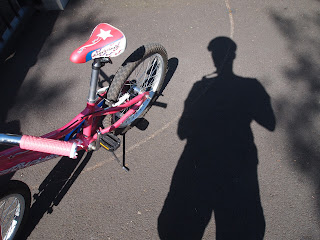 Today I rode bikes with my daughter from our home in Portland out to Gresham on the Springwater Corridor. An excellent day as we loaded up with food at Mother’s Bistro in Downtown before setting out to break the kid distance biking record.

And break it we did – covering about 22 miles. The kid peddling the distance on a one speed bike.

We saw homeless people, hipsters, retirees, and others who we could not conveniently label. Even a chicken crossed the road!

Here is a video of our excursion. Enjoy:

Posted by Eric Flamm at 5:02 PM No comments:

I, like other parents, am swept into hysteria at the drop of a hat. The moment I catch a whiff that other parents are doing something different or better I will go tilting at whatever windmill comes into my line of vision with the fury of a balding, over-earnest middle-aged man, hell-bent on doing things “right” (or at least right enough not to generate scorn from other parents).

Sunday we dropped the first kid off to spend a week at sleepaway camp. On display right then and there were a number of examples of creative and nifty packing containers for camp gear.

We had decided to use a large duffel bag with wheels as it could contain everything, including sleeping bag and pillow.

Others had complied with instructions and brought the traditional footlocker.

Many simply used a large suitcase.

Seeing a plastic drawer system sealed up with duct tape made me think the progenitor of this idea was either breathing the fumes of genius or madness. True, the bags only had to survive a 90-minute truck ride to the camp – there were no connecting flights or other way stations in which an awkward container would fair less well.

The drawer system would seem an improvement on the more traditional containers – at least from an adult’s point of view. Plus no arranging when you get there – presto, all socks in the sock drawer!

Knowing my son, who feels changing his clothes, unless it is to put on his Clone War pajamas, is energy not well spent, would not benefit from the drawer system. Most likely he will find the shoes, shirt, shorts he will wear for the week by rummaging messily through the bag.

Am I concerned we are stifling his sense of well-being by not establishing a more rational environment for him? You bet I am.

But my latest manta is my godsend – let the kids become problem-solvers. Saying this absolves me of fruitless teeth-gnashing and allows guiltless dereliction of duty, at least when it comes to camp bag selection.

Who knows, maybe next year I’ll challenge the kid to create his own luggage from scratch using only chicken bones and duct tape.

Posted by Eric Flamm at 9:35 AM No comments:

We held on tight to the older one, who went to sleepaway camp only at age nine. Given how she thrives on social activity we probably should have sent her at age four. Now the seven-year-old must do as his older sister does, so he will go for a week.

He is blossoming with boy power and is looking forward to frenetic, crazed activity with others who share his basic philosophy: pump up the  energy, pump up the volume. He will be fine as long as a nightlight is provided and some adult (or councilor ) tells him, at least once during the week, that he should brush his teeth (bathing will be a tough sell).

So tonight we will celebrate as a family. My son has requested hot dogs and kale for dinner (he knows he will have to eat some veggies) and strawberry rhubarb pie for dessert. Furthering the momentous occasion we will go see “Madagascar 3: Europe’s Most Wanted.” Obviously we want penguins and lemurs more than the other characters, but such is life. Mort, King Julian’s feet-worshiping  companion, is an often impersonated character around our dinner table.
Posted by Eric Flamm at 3:43 PM No comments:

Taking the Indoors Out


I’ve wanted for a while to take my family camping, not just hiking or picnicking, but actual camping where we would sleep in tents and cook and eat outside. I’ve done quite a bit of camping in my life, but the rest of my family has not. Previously every time I broached the subject my wife gave me a concerned look and reiterated that she grew up in Los Angeles to non-outdoorsy parents.

Fine. I needed to start at the beginning. The very beginning. Perhaps the main thing I wanted to stress before the trip was that the weather could be cold and rainy and, yes, we would be dealing with it and not jumping into the car and fleeing to a hotel . In this regard our recent trip to the Oregon coast was perfect, in that it was cold and rainy two out of the three days we were there – and we survived!

The other Big Picture idea was to try to explain what the experience is all about. I told my kids camping is about bringing a limited amount of gear to a place and living simply and close to nature.

This was important as we stayed at Cape Lookout State Park, a popular place, with many huge RVs sporting satellite dishes, generators, and most all of the amenities of home. I wanted the kids to understand that basic camping requires practice and skill, using what you have at hand to make yourself comfortable.

All the above points were lost on my seven-year-old, who when told we would be sleeping in a tent and having a campfire needed no additional information. My 10-year-old did ask me on a hike why I enjoyed camping.

“I like letting my mind drift,” I said. “When I see only trees, ocean and sky my brain feels relaxed.”

I don’t know if relaxing the mind was on her agenda, but she had a great time hiking and appreciated the general togetherness.

Another concept I tried to impart on the family was responsibility for oneself. In the morning I had the crew pack lunches which were stowed in day packs as well as a variety of snacks. This was liberating for me not to be the Sherpa of the group, telling whoever was thirsty or hungry to deal with it.

Generally everything went well. There was only one moment when the kids, feeling beaten down by the rain, sat in the car and listened to their iPods. They were cold and didn’t think of getting back into the tent, feeling that was a place only for sleep.

We heard three ranger talks, did lots of hiking, and visited the Oregon Aquarium. I opened my brain for some rather poignant campfire stories about an imagined Polynesian island (more on this later, much later). Other than some infected bug bites and constipation from the trail mix (problem now solved!) we are set for another round sometime soon.
Posted by Eric Flamm at 9:34 AM No comments:

We did it. The kids were unsupervised by adults for about two hours and 15 minutes. I was the first to return home and was shocked by the absence of smoke streaming from the kitchen, sinks running over, toilets befouled, wild spray paint graffiti, or any new chaos whatsoever (the old chaos was safely intact, however).

Nor were there any stories of how the strange man appeared at the window, and when the kids dutifully ran and got the firearm, the bullet jammed in the chamber (damned automatics).

When I came home the kids were watching a pre-approved program and were in their pajamas with teeth brushed. They didn’t want to go to bed (!), but this, in itself, doesn’t conclude the kids have become irrevocably feral.

To give ourselves the tools to accomplish this feat of survival, we did, however, do some groundwork to minimize the chances of random and complete havoc. Such steps included:
There was the odd prosthetic hook dangling from the front door. I’ll have to ask about that.
Posted by Eric Flamm at 9:16 AM No comments: