Here at Portdaddia Central I refuse to rest on my parenting laurels, no way. Instead I embrace a deep commitment to constant and never-ending improvement to become the best Portdaddia I can be.

To that end, I sometimes read. Books. With words. And sometimes pictures. Recently at the library I found the following tome: 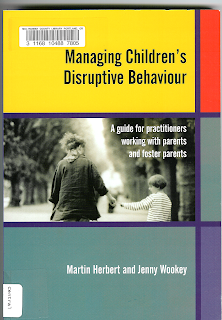 I brought it home and found that it was published in England, which means that a completely different set of spelling rules and vocabulary are used, rendering the book nearly incomprehensible. Lucky for me we have Google Translator.

Starting with the tantalizingly nearly understandable:

Learning and failures to learn are the keys to understanding the process of problem development. Behaviour results from a complex transaction between the individual child and a social environment that sometimes encourages and sometimes discourages certain actions. Rewards, punishments and other interactions are mediated by human beings and within attachment and social systems, and are not simply the impersonal consequences of behaviour. Children are relating to, interacting with, and learning from, people who have social and emotional meaning and value for them. They feel antipathetic to some, attached by respect and affection to others. Children do not simply respond to stimuli; they interpret them, and the message they receive in some homes are frequently discouraging and, at times, cruel.

I then translated the passage to Haitian Creole, then back to English for the resulting lucid prose:

Learn chess and learning are key to understand the process of development issues. Conduct results from a complex transaction between the child's individual and a social environment that sometimes encourage and sometimes discourage certain actions. Reward, punishment and other inter-actions are mediated by human beings and the social attachment system, and not simply consequences anonymous behavior. Children with respect, communicate with and learn from, people with social meaning and emotional value for them. They feel the opposite of some, stained by respect and affection in a manner to others. Children who do not simply respond to stimuli, they interpret their dreams, and messages received from some homes are often discouraged and, at times, nasty.

More to the point, my seven-year-old son pointed out that one of the co-authors, Jenny Wookey, might be a relative of Chewbacca, an excellent gunner and a fuzzy friend, in his opinion.

Furthermore the book was published in 2004, rendering it a quaint relic from long ago. Until I find better, I'm starting to learn chess and interpret dreams.