Working At Home (With Kids)

Yesterday I had told my kids, who got the day off from school, that they could play video games as long as they wanted. That took up six hours of their waking time, which still left about nine hours unaccounted for.

When trying to get things done with kids in the house there is always the comedy of reading a line, getting interrupted, reading it again, another interruption, until finally you make a video. That's what happened yesterday.
I got a bit cranky, but generally I'm thrilled to have bizarre little creatures running amok in the house. 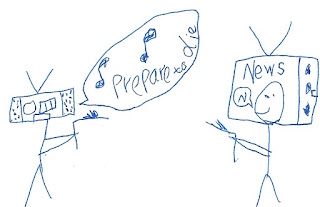