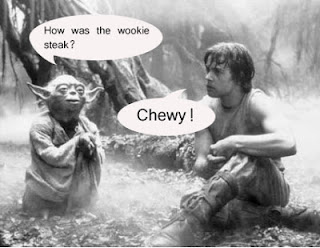 In the 1990's I read an interview with Alec Guiness, who played Obi-wan Kenobi in the first Star Wars film (1977). He recalled how at a Los Angeles supermarket a mother and child walked up to him, the mother saying her son enjoyed the movie so much he had seen it 20 times.

"Will you do something for me?" he asked the boy. "Yes, anything!" "Never see the movie again."

"That's a terrible thing to say to a child!" the mother said as the pair stormed away.

When I read this, before I had kids, I praised Guiness for trying to end the fetishization of Star Wars. I imagined he viewed the film as a good story with fresh design concepts but lacking the substance that would warrant scholarship.

Now that I have kids I realize that it's fine if a child watches a movie 20 times. The story or character has moved him/her and further contemplation, fantasy, fixation on the details, shows a seriousness of thought that is praiseworthy. When I'm in this mode I think of Guiness as an old sorehead.

If Guiness were alive today what would he have to say about the myriad streams of marketing, scholarship, lifestyle choices, recipes, vacations, metal bikinis, related to the Star Wars franchise?

Now that Disney, the Grand Master of inserting branded movie products into life, has purchased Lucasfilm, whatever level of comfort I've built up in those 35 years since the first film came out may not be enough to combat the new deluge. I have a few years to prepare myself with calisthenics.

In the meantime my son wants Star Wars Lego for his birthday. And why not? It's totally awesome!