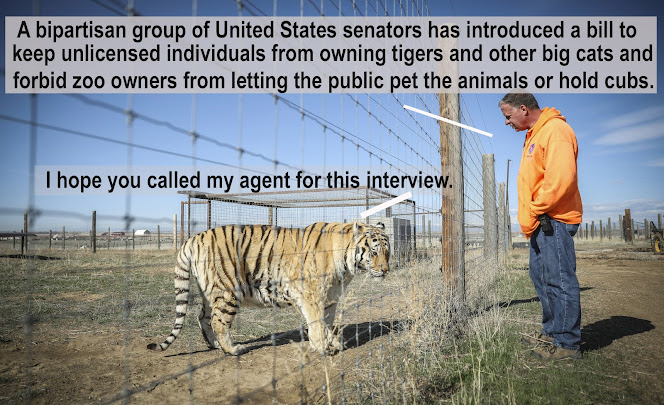 The roadside zoo owner known as Joe Exotic was such a hit – in a freakshow way – in the Netflix series “Tiger King” that actual US senators want to address the problems highlighted in the show.

A group of senators introduced a bill designed to keep unlicensed individual from owning tigers and other big cats and forbid zoo owners from letting the public pet the animals or hold cubs.

Now that I’m officially a nutty cat person, the notion of controlling a 500lb cat that really only eats meat, and a human can’t pick up to scold or cuddle, is disturbing.

I saw a documentary about domestic cats. They have been selectively bread for 4,000 years to be small comic geniuses. Why go against all this effort? I suspect it is the American insecurity about power – bigger is better and biggest is best. I can pet our cat a few times a day – and when he bites me out of impatience, I always survive.

I hope this bill succeeds into law as it would be a nice example of how change can happen.