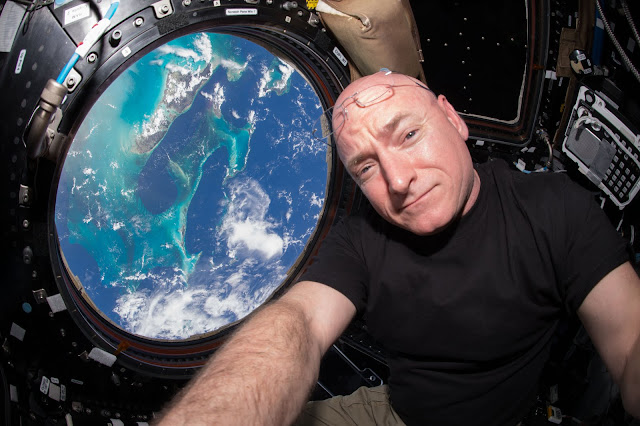 A truism of these Dad blogs is that us dads say stuff, like, "I can't believe I've turned myself into my father. The old man always said crap like that, and now I'm saying it."

Well, rest assured I've not turned into my father. But who have I exactly turned into lately?

All this came around when the 11-year-old began to take serious interest in Scott Kelly, the astronaut who logged 340 consecutive days in space. The kid now knows many facts about how the international space station functions and various details about the lives of several astronauts.

Together we listened to a podcast about how one plays guitar in weightlessness, as well as enjoyed Scott Kelly's video appearance on the Late Show with Stephen Cobert.

During a moment of rebellion when the kid didn't want to do his homework, I heard myself saying, "You need to do your homework, if you want to be an astronaut."

I honestly believed what I said, but my tone and phrasing sounded vaguely artificial and a bit strained, suggesting I've become a fictionalized father, some sort of hybrid between Ned Flanders and Robert Young -- the reruns playing for eternity on my imaginary Youtube.

I will own what I've become.

Favorite Ned Flanders quote: "Call me Delta Airlines, because I can't handle all your extra baggage."