We first went to a movie theater that served food, showing up almost an hour before the debate was to be aired, only to find there were no seats available.

One of the kids was quiet upset, worrying that without his viewing the debate and his positive energies flowing towards Hillary, a know-nothing, incompetent, misogynistic, xenophobe with a fourth grade vocabulary would win the White House.

We found a restaurant that had a large screen TV and settled in for the debates. Trump's weird way of implying everything, but saying very little was on full display. Always fun to watch with a room full of fellow travelers.

One man passed out "Debate Bingo" cards, pictured below: 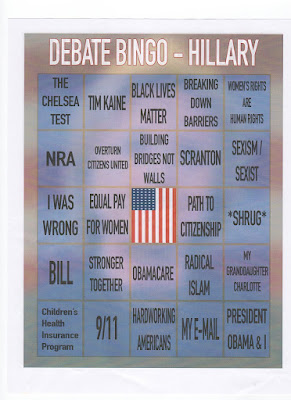 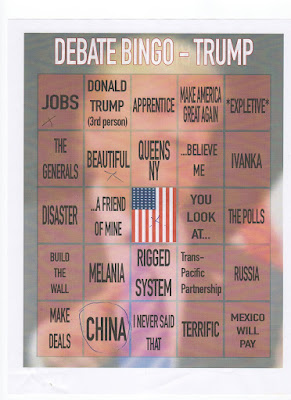 I get the joke, but feel there is only one joke candidate running. I was happy to see Secretary Clinton pressing Trump's buttons on issues that have already been fact-checked and verified, such as Trump's support for the Iraq war and his questioning of Obama's birthplace.

I was particularly glad Hillary was well-prepared and patient with all of Trump's outbursts and interruptions -- a strong contrast to Trump's bluster and buffoonery -- showing her to be a forbearing and intelligent orator.