Kid Goes Appropriately Berzerk At The Right Time And Place


I don't spend much time wishing I was 9-years-old. I value the independance of adulthood.

Yet when I see a bunch of 9-year-olds put into a massive space filled with trampolines it's hard to resist yearing for the pure enjoyment such an expereince brings to the kids. 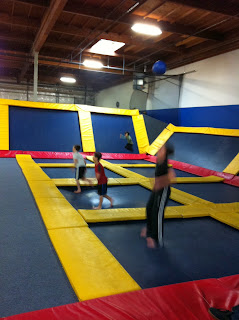 Add some rubber balls for a bouncified game of dodgeball and you've got a true kid-topia.

My family has already attended Sky High several times, but this weekend was my first. Rather than flex my brain as to what I would do if I were 9, I thought about being 20, contemplating the amplitude and rotations I would practice so when I hit the terrain park at the local ski hill I'd have the sick trick already dialed in.

Indeed a middle-aged dad's folly. I resisted the urge to bounce, and thus I'm healthy to go skiing. Perhaps not to the terrain park, but to have some fun all the same.