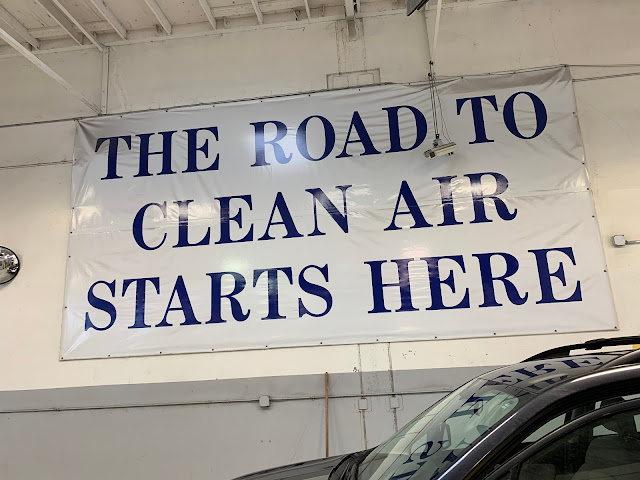 When I drove up to the DEQ inspection site today there seemed to be a hundred cars ahead of me. When the intake attendant understood I wished to pay with a credit card, he told me to pull into a very short line.

This was the self-inspection line, where two cars received inspection at the same time.

I scanned the DMV letter with the QR code and my 17-digit VIN number and license plate popped up. I then worked through some screens on a touch pad. The attendant connected a cable to a port under the dash that I didn’t know existed and downloaded the data.

Within five minutes I was on my way. Very nice.

This was a chore that I was happy to have minimized. But it made me consider the other person who previously needed to work that inspection bay. This is the trend of our society, with greater automation and less need for bureaucratic data entry jobs.

In Oregon we have outlawed pumping one’s own gas to offer the public a few minimum-wage jobs. Cashiers in supermarkets are also not completely necessary. With the coming of self-driving cars and trucks, an entire industry of workers, millions of people, will be made redundant.

My pick for the Democratic presidential nomination is Elizabeth Warren, but I am intrigued with the candidacy of Andrew Yang as he is the only candidate talking about this massive problem of employment in the US.

I don’t have any clear philosophies about how to more equitably distribute our nation’s wealth, but innovation will continue and not all those laid off can become massage therapists, Amazon warehouse workers, and craft brewers. I hope some of Yang’s ideas get coopted into the next administration.