Vexillology No Stranger To These Parts

Vexillology is the scientific study of the history, symbolism, and usage of flags. The kid is a big vexillogist. He recently went on a decorating spree for his room.

The kid also is interested in designing new flags and participating in internet flag forums. He recently received feedback on his flag for the Dutch States of America. 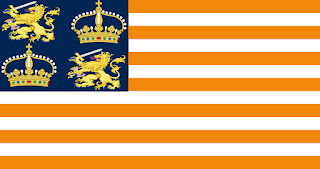 I'm ready to be supportive of the kid's new interest. Although I don't have much in the way of information, I like to think I influenced his direction by having the flags of China and Taiwan hanging opposite each other in the garage.