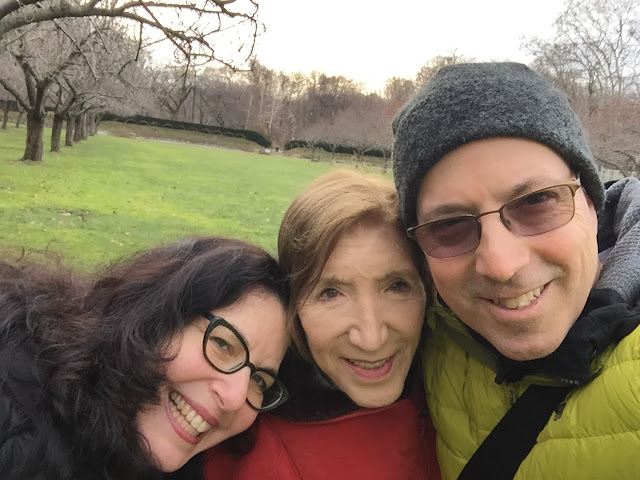 Over the winter break, our family went to New York City to visit relatives. Before going, the daughter voiced her interest in visiting Brooklyn to see the bench and tree in the Brooklyn Botanic Garden dedicated to her great-grandparents. She thought it would be a nice outing to go to someplace of historical import.

My grandparents individually came close to living 100 years in Brooklyn, so an outing to the “Old Country” was most appropriate.

In Manhattan, as we organized to go to Brooklyn, it became apparent that there was more going on than a team composed of three generations could accommodate. The youngest insisted on eating lunch at a restaurant called “Kimchi Grill,” while the daughter now prioritized seeing an art exhibit called “The Dinner Party” at the Brooklyn Museum.

Another interest of the daughter was to be more independent in New York, so the Brooklyn outing turned into a kids-doing-it-for-themselves thing. I gave each kid $40 and explained how the subway worked and wished them good luck.

My mother was worried I was too permissive. The daughter is almost 16 and the son 13, old enough to move around NYC without armed escorts.

As the kids navigated subway lines, the upper ages took a Lyft to Brooklyn. We saw the exhibits at the Brooklyn Museum and made it to the Botanic Garden, even finding the bench and tree with the commemorative plaques.

The kids made it to the museum but balked at paying the entry fee to enter the garden, as it is winter and there wasn’t much to see. I didn’t fault them for their thinking, feeling their great-grandparents would have been satisfied that their memory motivated the kids into exploring Brooklyn on their own.

The kids later reflected on the day, realizing the complexity of metro cards and the challenge of grumpy MTA workers.