Ice Storm And Big Day Out For Portdaddia


After a few days trapped indoors, I needed to go out and run errands and get some exercise. As these things go, I had no idea I was going to have such an eventful day.

First on the list was the film crew in our neighborhood -- it helps when a next-door neighbor is a reporter for the local news.


Then came the long trek to the post office. On the way I noticed the soles of my trusty hiking boots were starting to delaminate. What started as a bit of an inconvenience developed into full-blown catastrophe when the left sole fell completely off the boot. 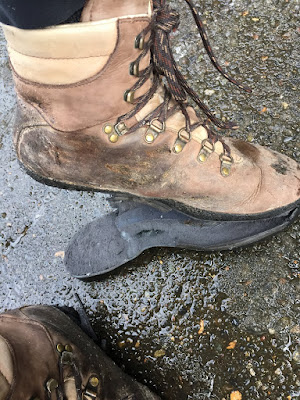 In town I changed course and headed to REI for a new set of kicks as my feet began to soak up water. The staff made me feel like Grizzly Adams as I limped into the store with boots and boot parts, all so completely thrashed as to appease the most eco-conscious among them -- no further use for these things, just recycling. I suspect the flattery was to encourage me to purchase a more expensive pair of boots, one that would last the requisite 14 years as my last pair had. 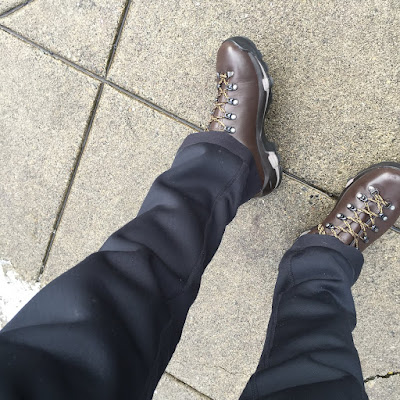 After a haircut and a bowl of ramen I was back trudging up the frozen streets, feeling pretty happy that my crisis had been so easily dealt with. On an icy day like today there was no walking barefoot or having LSS™ pick me up. My backup plan was to go to a hardware store and duct tape the soles to my boots.

On my way home I passed my un-trusty VW Passat, parked on a road that would be eventually plowed and sanded. 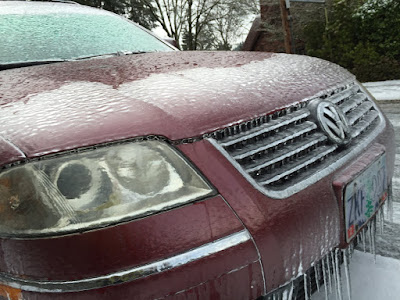 I don't know that I triumphed over adversity in any significant capacity, but I had fun, and for that I say Stoke!