I went on a travel this weekend which put me up close and personal with the TSA. I understand the necessity of the TSA and do not dispute its mandate. However, the actual procedures and enforced policies often leave me wondering if somebody is asleep at the wheel.

When I fly with my family, often one or two of us are granted TSA-pre check, allowing an individual, often a child, to go into a different line. This is supposed to be something helpful, but when a group is traveling together such things become meaningless. When I buy plane tickets I accurately report my kids' ages, so the TSA should know we are a family traveling together.

From the few questions asked of me and my kids by TSA officers, I don't even know if we are supposed to stick together or can be separated. On one leg of the trip some of us were given a full body scan, then on the reverse leg told that as we were a family we could just go through a more basic medal detector.

Then there was the infamous moment a few years ago when the TSA officer asked me if my wife was a woman. This was very early in the morning and I wasn't wearing my glasses because they had metal frames and I assumed they wouldn't be allowed (they were). My mind twisted in on itself and I thought that if my wife was a man, woman, or a non-binary individual, who the hell's business was it anyway?

The officer, a stern-looking fellow, was actually trying a bit of humor, as his name was the same as my wife's. Before he explained himself I had resolutely complied to his question, saying LSS was indeed a biological woman.

Recently LSS suggested I follow TSA on Instagram as it might be a fun peek into the wacky institution. I did and have been following the images for the past several days. The exercise was a good one, and I am now thankful for the copious amount of dangerous objects that don't make it onto planes. Also I learned about how to quickly ask the TSA if an item can be brought on a plane. Consider: 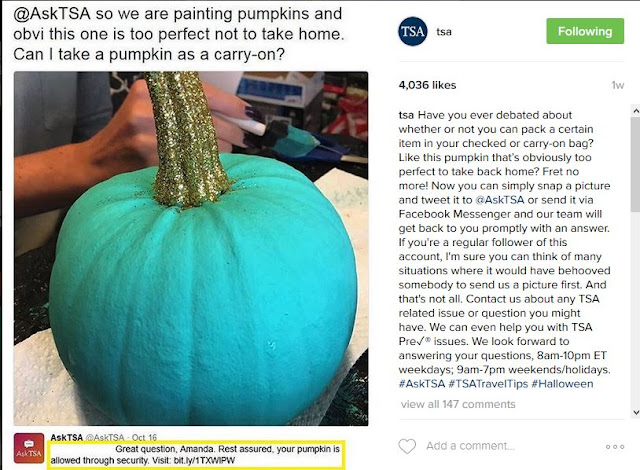 I know its a tough job and someone's gotta do it. I hope the government will increase funding so quality people and good equipment can make the TSA experience as painless as possible.