School was called off Thursday in anticipation of snow and icy roads, which arrived more or less on time about midday, allowing everyone who took precautions to feel smug even if they became stranded or delayed.

Friday was a snow day as well, as the weather went into the zone of 33 degrees with freezing rain. A twist to being at home with the kids was added when we lost power about 3:00 pm. As the ice had been building up on the trees for a day, and the ground was soft from heavy rain, it was only a matter of time before trees began falling.

At home it was cold and dark, but our gas stove worked fine with a kitchen match for ignition. We wore our camping headlamps, lit a lantern and candles, and generally were relaxed that power would be restored within a few hours.

This blackout was different than other ones I've suffered in that our charged cell phones worked fine, as the outage was localized and nearby cell towers still functioned. The kids watched a DVD on a charged laptop, LSS and I surfed the internet, and we were all cozy under our blankets for a hibernation-like sleep. One of the kids was pretty energetic as she had been cooped up inside for two days. I streamed music through my phone for an impromptu dance party with glow sticks.

Late Friday night I was awakened by a sustained and loud popping and crackling noise -- LSS telling me it was just ice sliding off the roof.

When daylight came the power had still not come back on and I peered out of the bedroom window. Things looked different, I thought, because everything was ice and snow covered and such a sight is a rarity in these parts. Then it dawned on me that the tree immediately outside of our bedroom window had gone missing.


As I got dressed to inspect the damage, I heard a loud noise and noted that the power lines outside our house had begun to jump up and down. 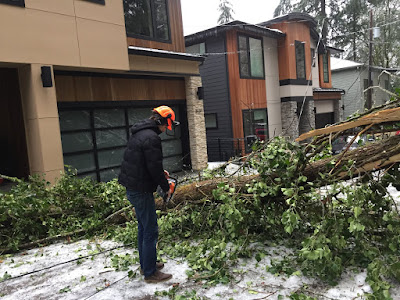 A few houses down a tree had taken out another section of power lines. My neighbor, who is a better Oregonian than I am, was immediately on the scene with a chainsaw and proper safety gear. No stranger to the chainsaw, he made fast work  of the tree. 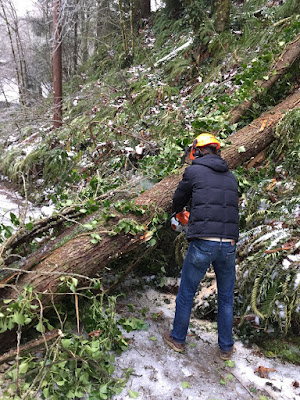 Things really seemed extreme when I learned another neighbor had not one, but two trees fall on his property, breaking a car window. When I chatted with him he reminded me that only two weeks before yet another tree had fallen on his house. When the aborist had arrived, he gave the remaining trees a clean bill of health and declared them safe. The lesson here is that tree saftey is not an exact science.


As Saturday wore on the notion that power would be restored soon began to wear thin. The refrigerator now smelled and I figured we would eat the hamburger before it went bad. I cleared our patio table of ice, opened the umbrella over the table to keep the rain off, and sparked the portable gas grill. I could have cooked the burgers inside, but the darkness of the house and being inside so much had begun to wear on me.

As the prospect for another night without power loomed, we decided that a movie and dinner in a restaurant might be a good way to bring us to bedtime. So we saw Moana and ate Chinese, all of us enjoying both. Adding to the fun, when we returned home the power had been restored.

Oddly enough while sitting in the blackout I ordered an electric chainsaw from Amazon. This is one of those things where if I was really concerned about emergency preparedness I would get a gasoline-powered one. My thinking is that in the 15 years I've lived in our house, trees have fallen or needed to be removed three times. A gas-powered chainsaw unused over such long periods might need maintenance. Electric tools are super low maintenance, but they need...electricity.

The one piece of gear that was an unexpected help was the jump starter battery I carry for winter driving. Our unit has a USB port which allowed us to charge our phones and communicate with the outside world, or at least Facebook.