My daughter is now 13, but she wasn't always.

Much to her chagrin she went through a princess stage when she was in kindergarten. She wore tiaras and had a Snow White dress and other gowns, enjoying all sorts of movies and books in the princess genre.

I remember years before I had kids reading an interview with a dad in a magazine about how he indulged his three daughters in their interest in participating in beauty contests. I then considered kids participating in beauty pageants weird and demeaning. This dad sounded pretty grounded about the pursuit, saying his girls took the pageants seriously, practicing all sort of song and dance routines as well as speeches and other skills. "If I had three boys and they all wanted to play soccer, we would do that," the dad was quoted as saying.

This dad interview stayed with me for a long time. So when my daughter entered her princess stage I felt I needed to "get over it" and help her be the best princess she possibly could be.

With that thought I created the Princess ID. I printed it out, put it in a laminated sleeve with a lanyard, and gave it to the kid to wear as an official credential of her royalty. She felt pretty good about it at the time; and I felt I had the potential to occasionally get something right as a dad myself. 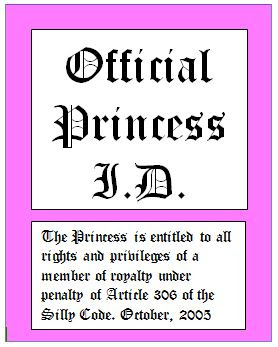