Bridge Over the Wadi 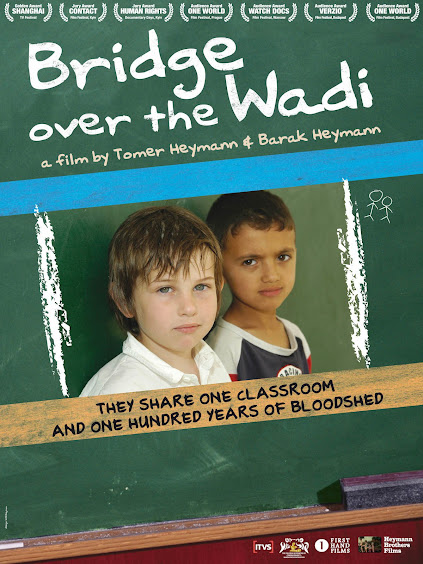 “Bridge Over the Wadi” is a short documentary chronicling an Arab-Jewish primary school in Israel. The film was made in 2006 and is available for streaming on Amazon Prime.

The film is an excellent window into the type of coexistence work Hand In Hand, the school’s founding organization, is doing. The organization now operates three schools in different parts of Israel.

As one can guess, lots of cute kids playing and showing affection for one another. The film becomes significant when it shows the kids in their parents’ homes, mom and dad, even a grandmother, expressing strong reservations about the friendships their kids are making. The old narratives of Arabs being terrorists keeps coming up.

The dramatic climax of the film is teachers talking to the kids about Israel’s Independence Day, or the Nakba (catastrophe) for the Arab students. The confusing message the educators tried to impart to the kids was that one can feel happy for Israel, as everyone deserves a country to feel safe in, but we should feel sad for those who had to leave their homes and not come back.

Also filmed was a teacher feedback session about the above explanation of Israel’s Independence Day. I felt that the Arab teacher was unfairly forced to adopt more of an Israeli narrative than she would have liked. As I watched this, I had to keep reminding myself that 2006 had a different political context then current times, but still the classroom depicted had more Hebrew spoken than Arabic. None of the Israeli parents spoke Arabic on camera, while most of the Palestinians had fluency in Hebrew.

The film does a great job showing the formidable obstacles to coexistence – and this is coexistence in Israel proper, not the West Bank or Gaza. There are scenes of Palestinians being turned back at a checkpoint after trying to visit relatives in the West Bank, a father putting on his IDF uniform for reserve duty, and little boys musing to their Arab counterparts that one day they will be soldiers. The Arab boys take such comments in stride, saying one day they might have to blow up the Israelis.