"Everything Is True, Nothing Is Permitted" 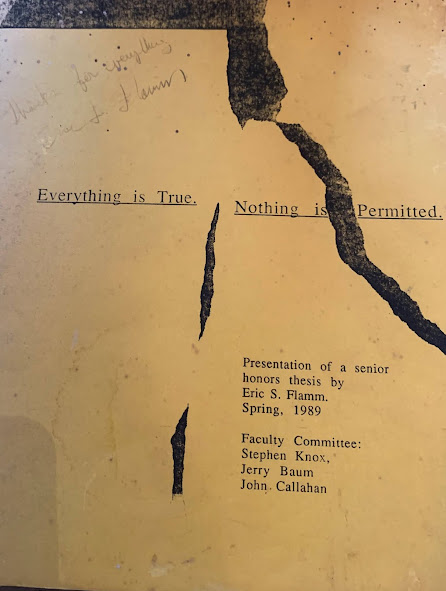 Recently I learned that a family member had saved a copy of my undergraduate honors thesis about William Burroughs – the Beat writer famous for Naked Lunch (1959).

Both then and now I was immensely happy that we shared this bond about Burroughs, and both enjoyed deeply dark, sardonic satire.

I read the first few pages of the work and cringed a bit for obvious reasons. More often I felt proud that I had cut a direction that was important to me and followed my interests. In many ways I’m still the same guy who likes the punk aesthetic, be it music, art, or literature. Subtlety is something I must cultivate but these other cacophonous notes resonate like Mozart on a church organ when I experience them.

When I first started thinking about doing a project on William Burroughs my thoughts were he was a writer who didn’t feed the public pabulum – he fed them shit. I had never encountered a writer who tackled all the taboo subjects of society with such a flaming irreverence. It was out of rock’n’roll admiration for the man who could scream the word “FUCK” with the written word that first drew me to him as a reader. Initially I saw William Burroughs as a radical spokesman of free living and I wanted to explore his vision. I now find this sort of thinking naïve: Burroughs’ message is much more complicated than being some hedonistic sodomite’s looking to rationalize his chemical habits.