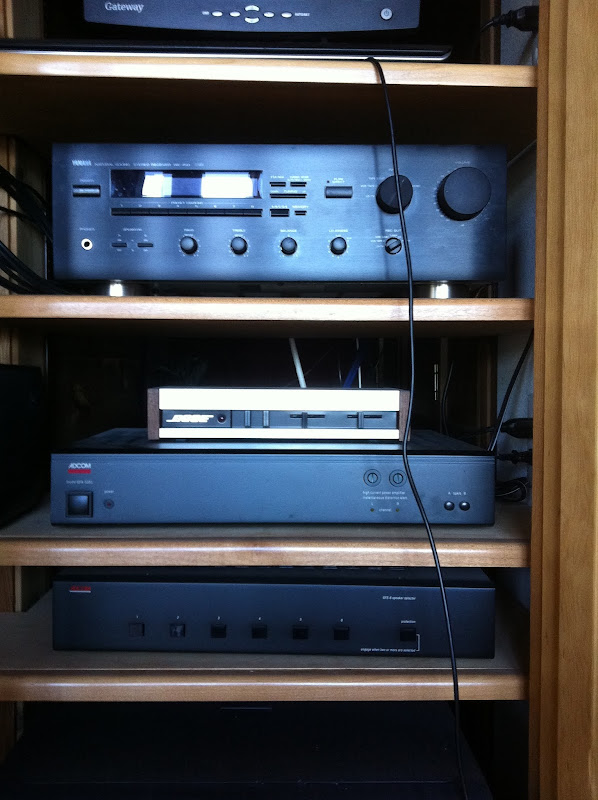 In high school and college, I liked music. Loud.

I had big speakers, which may or may not have produced good fidelity. But they were able to play music at a high volume.

Parts of that initial stereo accompanied me to foreign sojourns, and back again to the States. When we bought our first home in 2002, I still had the idea that a big stereo would soon grace our abode. In the meantime, I used my ancient receiver and a small, cheap pair of speakers.

We bought another house in 2006, this one had a fancy sound system left in it. Double cassette deck, turntable CD player, amplifier, pre-amplifier, audiophile speakers, and a switching box to port the sound over wires to different parts of the house.

As the years wore on each component broke in turn. In 2011 I tried to repair the speakers and amplifier, getting rid of the cassette deck and CD player. By this time, I was plugging various devices into the amplifier to play music that was stored in electronic formats.

A few years later the speakers, with their beautiful cabinetry, were stands for drinks and a Bluetooth speaker, which sounded really good playing my music stored in the cloud. I admit my ear isn’t sensitive to the nuances of recorded music, the convenience of the set-up outweighing any devotion to puritanical snobbery.

All the wires and speakers in the house, and other stereo gear, became just anthropological oddities.

I listen to music almost daily when I work at my desktop computer, a small sound bar fills the room just fine with music that has enough fidelity for my tin ear.

And on those days when I want to wake the household with some inspiration, it gets loud enough.

Email ThisBlogThis!Share to TwitterShare to FacebookShare to Pinterest
Labels: Idiocy