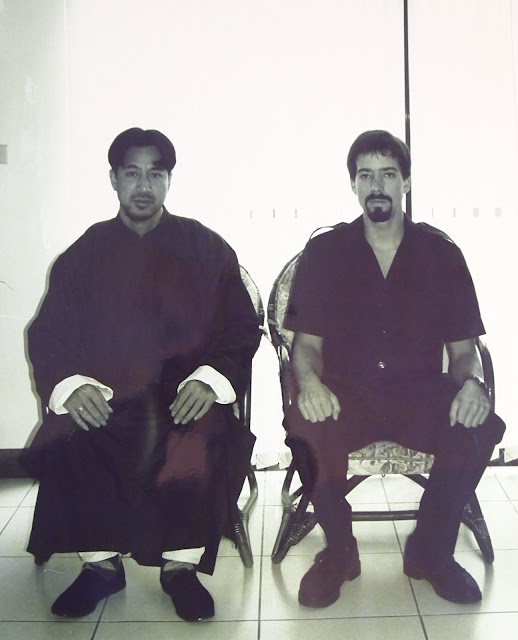 I was wearing a Sun Yat-sen suit which had passed as office wear for Kuomintang functionaries decades previous when air conditioning wasn’t ubiquitous.

Initially I bought the suit as a fun piece of local history, having it made at an old-time tailor shop near where I lived to the north of Taipei. I wore it to work and found the lack of reaction comforting, my foreign friends remarking that generally only men 50 and older wore such things. My Chinese friends might have thought it odd as well but were probably too polite to tell me.

At the time of this photo I wore the suit with seriousness and appreciation for all that Taiwan had given me. My friend Lawrence, sitting next to me, was a spiritual man who understood that philosophical explorations took many forms. He enjoyed wearing a traditional scholar’s gown while he did different artistic endeavors. He played the zither, practiced tai chi sword and calligraphy, and had a special room in his apartment outfitted with paper screens and tatami mats for meditation and contemplation.

I explained that I wanted a photo in the traditional style to mark my time in Taiwan. Lawrence understood immediately and set up the chairs and told me to not smile.

I suspect this type of thing wouldn’t be considered acceptable today – the suit, the attitude, another example of a white guy appropriating another culture. I can understand that.

Looking back, I worry that I was giving overt support to the Republic of China’s nationalists, weighing in on a political debate far beyond my purview.

I suspect all the above are equally true. Still, a nice memory.