Israel/ Palestine And The Street Poet 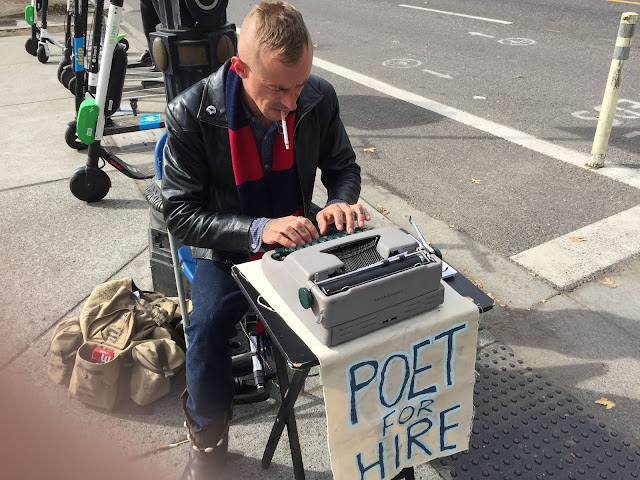 Portland has a nice waterfront park at the end of which is the Saturday Market, a place where craftspeople can sell their wares. As I walked through this cornucopia of duct-tape wallets, candles, kombucha, and wind chimes, I came across a poet for hire.

I decided before engaging the poet how much I would give and arranged the bills in my pocket. This was also to protect myself from myself, for I knew I would be playing with fire.

“Israel/Palestine is the concept,” I told the poet. “Express yourself however you see fit.”
I knew that the potential loomed to hear something awful. The poet had a tattooed neck and hands, green numbers and symbols poking out of his clothing. On his left hand’s middle finger was an upturned crucifix which suggested that he had no problem with confrontation.

Portland has no shortage of real, unmitigated anti-Semites. If the poet had something hateful to say, here was his platform. I told myself no matter the poem I would hand over the money and walk away, unless, of course, I became overwhelmed with uncontrollable urges.

“That a heavy one. Mind if I smoke?” The poet said this in a manner which let me know cigarettes were a precious commodity. I was glad he took this seriously.

When he finished the poem, he made a show of using sealing wax to stamp the paper – a dove. This was his only seal.

Here is the poem he wrote: 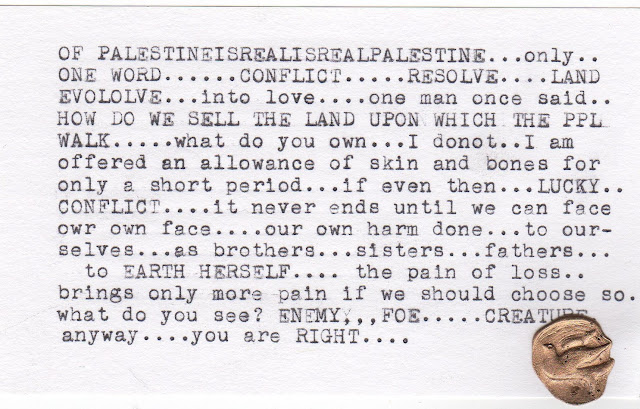 This was my litmus test of the universe and positivity won out. And, as is my nature, I proclaim stoke for all of humanity.