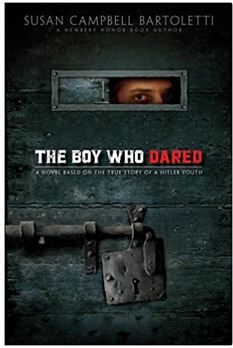 The following is the sixth grader's book report.

Imagine you are living in economic crisis. You are poor, tired, and humiliated. Imagine someone comes along and promises that they will get rid of your poverty and despair. That’s how Hitler got into power.


The Boy Who Dared starts off in 1933, where Germany isn’t at its greatest. They are suffering from the Great Depression, and the Versailles treaty has weakened Germany’s military. Helmuth is excited that Hitler has been elected, because he has heard his promises, and has listened to enough propaganda to see Hitler as a war hero who will save Germany.

In The Boy Who Dared, Susan Bartoletti does an amazing job writing the story of Helmuth Hubener, the youngest person to be put on Nazi death row.

Bartoletti uses skillful techniques to develop Helmuth as a character. In the beginning of the book he is sad that he isn’t going to Hitler’s victory parade, and at the end he is on death row for distributing pamphlets criticizing every part of the Nazi government from unnecessary air raids, to Hitler Youth, to the Gestapo.

Bartoletti’s use of rich language and memorable quotes wonderfully document Helmuth’s courage to stand up for what’s right.

“On the RRG Helmuth hears how the advancing Germans capture or kill great numbers of Russian soldiers. But the RRG never lists German losses. And so, for the truth, Helmuth tunes in to the BBC. Late each night, he opens the hall closet and takes out the Rola radio. He locks the flat door, and then hears a different story: about German planes destroyed by the Russians, sunken transport ships, and soldiers killed or captured. The Russians are fighting bitterly and bravely, but only Helmuth seems to know.”

This part of the book particularly struck a chord with me, as a new president is coming into the White House. While I don’t think we’ll become Nazi Germany, I am tired of being lied to by him and his surrogates. We need to make sure that he is held accountable for his actions, and be careful not to make the same mistakes the people of Germany did.

While the story itself is great, I had a problem with it. From the very beginning of the book, there are little excerpts from the end of the book; so we know that he is going to get executed from the very first chapter. As I kept reading, I did not find a meaningful reason to put the snippets of text throughout the book. It’s not like I didn’t think they were good, it’s that they ruined any suspense the book would’ve built up. That being said, I could enjoy the story, but I couldn’t feel immersed in the book, because every chapter started with an excerpt from when he is on death row, so I couldn’t feel the emotions as they were happening as well as I could have.

The Boy Who Dared left me with the chills. I can relate to being silenced, but thankfully I can’t relate to having the entire government against you (at least not yet). What amazed me most about this novel was Helmuth’s courage. It seems as if the entire government wanted to silence the voices of the citizens and not allow free thought, most people would curl up and wait it out. But not Helmuth. I absolutely LOVED how he wouldn’t stand for the Nazi government, even if it cost him his life. He was smart enough to know the consequences for distributing the facts, yet he still did because it was right.