There's some unusual ideas knockin' around my head. As I was born in 1965, perhaps at the height of the Cold War, I have the samba of black ops pulsating in my brain like mutant circadian rhythms.

The neurological sleeper cells became animated and leapt to the fore in 1986 when Iran-Contra broke big time. 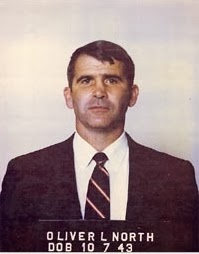 Lying before congress, having a foxy secretary shred scores of document boxes linking the US to illegal weapons sales, code names, communications with officials in high public office, pock-marked Latin dictators -- all of it so cloak and dagger times a hundred.

Then conviction on felony counts, which were eventually overturned on technicalities. So many twists and turns with politics, books and media, and the dubious Freedom Alliance.

Not content to have reached the pinnacle of crazed black ops, Oliver North pushed further, becoming a military consultant on the 2012 video game Call of Duty: Black Ops II, voicing himself in one level of the game. The action hero became a virtual action hero - so meta!

So when I gather end-of-year receipts I like to pretend I'm in some cramped White House office, taking heavy pulls of bourbon as I feed another ream of cargo manifests into the shredder.

The feeling eventually passes and I stop referring to the kids as McFarlane and Casey.

The joys of tax season!