"Eye Of The Tiger" Interpreted By 8-year-old, Critics Rave

The first time the kid heard "Eye of the Tiger" we were at a martial arts tournament and another kid was using the song as a backdrop for "open form," where moves are put to music.

As a result of the tournament I was reminded of the song's kickass opening chords and began imitating them for general encouragement.

The kid could stand such playful cultural references no longer, so he looked up the lyrics, played the video from Rocky III a few times, and the rest, as they say, is history. 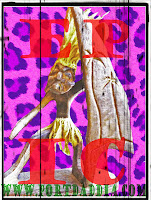