One of the pivotal moments that inspired me to start blogging was, of course, reading someone else's blog. A windsurfer posted some pictures of his sport and wrote that he "wanted to proclaim his stoke for all the blessings."

There it was in a nutshell, simple, straightforward, cool. My first reaction was, Why does this guy get to just totally proclaim his stoke? Where are his qualifications? Why him?

I then realized that I was jealous that he had found a way to be the person he wanted to be. I have no evidence of this, just that I was envious he was proclaiming stoke while I was stewing in my own juices about nothing in particular.

When I realized that I needed a platform to proclaim my own stoke I had some tepid experiments on Facebook where I introduced the idea as some type of long-running inside joke. Generally people were supportive, but with Facebook when I posted something and it generated no response I felt bad. Plus my posts appeared sandwiched between the usual feeds and thus looked poor in comparison.

I suppose the link to this blog looks poor in comparison, but, well, blah, blah, who cares. Now that you're here, I can let the stoke be proclaimed.

Starting the Portdaddia blog was a great creative outlet, giving me a blank sheet upon which to express what, may or may not, need to be expressed.

Today is Monday and the day was dark and long. But when I see my family I am happy. 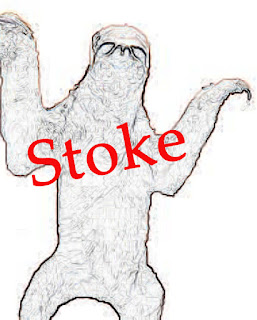